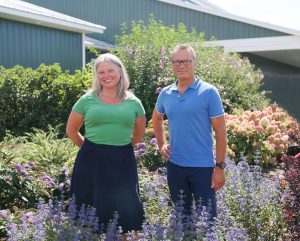 Here is the link to our new show website!  https://gardeningsimplifiedonair.com/

Here is the link to the Gardening Simplified Show Podcast! https://www.spreaker.com/show/gardening-simplified

Stacey and I are now broadcasting our show on YouTube. Watch as we give our listeners a good swift kick in the plants every week! Just look for the "Gardening Simplified Show" on YouTube and subscribe!

It’s not a “figleaf” of your imagination....The Flowerland Show has broadcast for a final time.

After nearly 30 years and over 1,500 shows, the Flowerland Show has come to a close.

Every path has an end and every end a lesson. Thank you so very mulch for all the support through the years! The Flowerland Show began in early 1993 and celebrated a Grand Finale Show on June 4, 2022.

A friendship I developed at the radio station was with Rick Beckett, an on air talent at WOOD doing a popular morning talk show with Scott Winters. Rick B. was a controversial guy, and often in trouble for something he had said or done. In his mid-50’s he was not healthy dealing with diabetes and a lifelong problem with alcoholism that he was very open about. A slip and fall on the ice had caused him to use a cane to get around. Rick B. would always summon me to chat when I was at the studio and loved to talk about his huge collection of CD’s and music. From time to time he would call me late at night out of the blue just to talk about random things. It seemed strange he would do that but later I learned why. He was gifting components of his collection of music and would give me CD’s and boxed collectors sets he owned, some unopened and still in the wrapper.

One night in mid-February of 2009 Rick B. called me late at night to tell me he had a gift for me. He knew that I was a fan of Jerry Reed and asked me to make sure and stop by the studio the next day, he would have a CD for me. Sure enough as he had promised the next day he was pleased as punch to hand me Jerry Reed’s greatest hits on a CD in mint condition. He made such a big deal about it and seemed quite amused that I was now the proud owner of his music CD ‘The Essential Jerry Reed.’

A few days later, I remember the phone ringing waking me my from my sleep in the middle of the night. My daughter Angie was calling and, startled, I tried to focus on the words she was saying. Earlier that Thursday night on February 26, 2009 paramedics had been called to Rick B.’s home after he called his girlfriend saying he was having a heart attack. Rick B. died that night at home and Angie, who was program director for WOOD radio at the time, was calling me to report the news. Rick B. was 54 years old and just like that he was gone.

The next morning when I got into my car I reached over on the seat and picked up the CD Rick B. had given me the week before. I unwrapped it and pulled the disc from it’s case popping it into the car’s CD player. I drove quietly down the road listening to the songs and replayed track number six ‘Smell the Flowers’ a number of times. Smell the Flowers is a song sung by Jerry Reed and produced by Jerry Reed along with Chet Atkins recorded on October 25, 1971 and released by RCA records. Chet Atkins, an amazing and legendary musical talent, collaborated over the course of his career with a couple of my favorite guitarists Jerry Reed and Australian guitar legend Tommy Emmanuel. I have seen Tommy Emmanuel in concert from the front rows a few times and marvel at his talent as a guitarist. Jerry Reed was quite a legendary guitar player too however most knew him as a lyricist, poet, humorist and movie star from the Smokey and Bandit movies.

Looking back I think of all the people in and out of my life throughout the years. I vividly recall details of conversations with those that have passed on from this life and the impact they had on me. With each in hindsight I now see they were giving me gifts, memories, advice just days and weeks before they died. It’s almost as a garden at full bloom in its glory during October before the first hard frost, they knew the end was near. They were helping me pause to smell the flowers. I’ve learned as we age our frame of reference grows causing time seemingly to fly compared to when we were younger. As I rolled down the road the snow stopped and the sun peeked through the clouds. I played the Jerry Reed song ‘Smell the Flowers’ a number of times that day and after Rick’s death it became a part of me still today as a reminder how every mile is precious, every success fleeting and every day a gift.

When you go the plants aren’t all going to die. They can flourish with the seeds you’ve sown, the memories you’ve cultivated, the groundwork you laid, and the legacy you’ve planted. Take your cue from nature. Flowers, snow, sunshine through the clouds, fall color, soil warmth, spring emergence can all quietly, quickly and unexpectedly change the world around you. Your time has come. May the forest be with you.