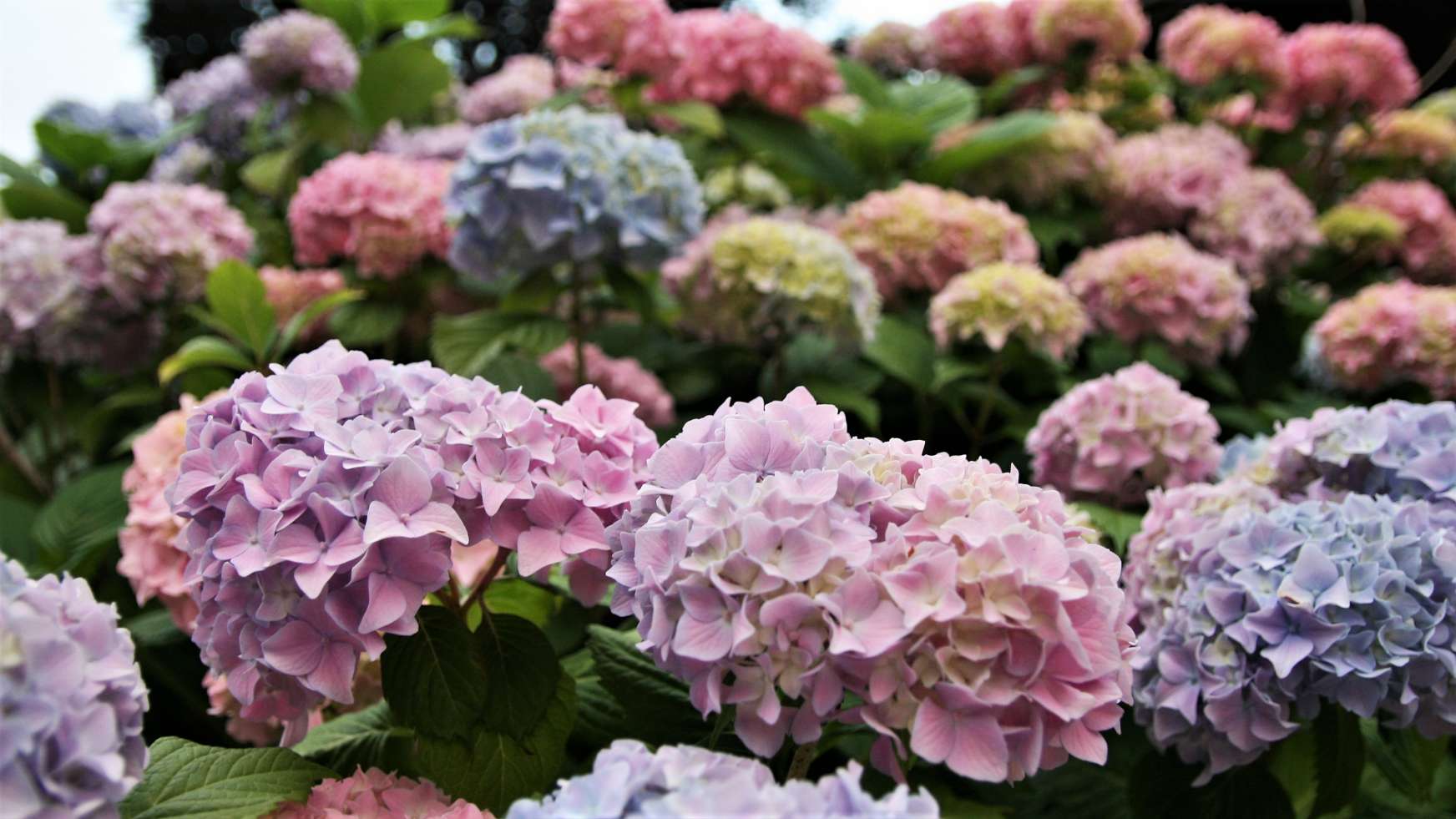 His Hydrangea would simply not bloom

and caused him to fret and fume

Being all the wiser

The weather had sealed his doom

Then there are the Hydrangeas. The plant people love to hate. The source of more questions on a live radio call in show rivaling the never ending mole and pruning questions.

So what to do for fledgling Hydrangea enthusiasts anxious for a mid-summer show of color? Carefully nurturing their prized purchase with great anticipation they await the reward of the large showy blooms that will amaze their friends and neighbors. When just foliage arrives and no blooms despite their care they frustratingly throw in the “trowel”.

Plants like people react to their surroundings. There are different types of people. There are different types of Hydrangeas. I have watched people blossom and thrive in the right environment, in the right surroundings. The “don’t try to put a round peg in a square hole” analogy. The same can be said for Hydrangeas. A hydrangea in the right microclimate will thrive when you get to know their personality. Isn’t that why we love hydrangeas in the first place? Plants with personality that can mope, be perky, droopy thirsty, floriferous, temperamental and in the case of some change colors based on the environment. Your surroundings affect your attitude. That’s why I like to hang around positive people.

I have learned through the years people thrive in a style that is more collaborative than imperious. A collaborative environment we like to call a micro-climate also best suits hydrangeas that bloom on old wood. You scratch my back I’ll scratch yours. Sun in summer and protection from wind and sun in winter, a moist but well drained soil, some sanctuary from extremes. Homeowner and temperamental hydrangeas in a quid pro quo relationship.

In the realm of microclimates, living on the Lake Michigan shoreline I have found that hydrangeas and rhododendrons thrive here. Massive plants that bloom seemingly carefree as opposed to further inland. Climate plays a role. Creation of protective microclimates at inland planting sites will greatly improve your success rate. Near the lake we benefit in winter from heavy snow that provides plants insulation. The lake also provides a warming affect in winter as the warmer water of the lake moderates winter extremes as opposed to the bone chilling drops further inland. In spring the now cold water of the lake makes it cooler than inland and plants are slower to wake up. This is a good thing, especially in years when inland early unseasonable warm temperatures cause plants to break dormancy only to be zapped by a zinger frost in April or early May. In summer temperatures tend to be cooler near the lake tempering the extremes of summer for both the plants and those who flock to the lake for time on the beach.

Hydrangea macrophylla are also known as mopheads, lacecaps, hortensia, or florist hydrangeas. No wonder this gets confusing to people. “Macro” or big and “phylla” or leaf. I think the best way to recognize them is as “big leaf” hydrangeas derived from the name macro (big) and phylla (leaf). Big leaf hydrangeas bloom on the previous year’s wood (old wood) so avoid pruning them unless you have to. Deadheading is fine by snipping off the old blooms at the tip.  Today’s new variety introductions bloom on new and old wood and are known as reblooming or remontant hydrangeas. A remontant plant will produce more than one crop in a season.  That said, a protected area from winter extremes is helpful. Deer, pruning or temperature extremes can cause disappointment in blooming. I find the north and east sides of the house are a great place to grow a big leaf hydrangea. Avoid the temptation to prune back the leafless “sticks” in your landscape. If you drive stakes in the ground to surround the plant with burlap in winter or fencing to pack with leaves, don’t remove the protection too early in spring. If buds swell in early spring weather and then we get a hard late spring freeze in the 20’s you can lose the blooms overwintering from the previous year. You can control the color of bigleaf hydrangeas with a soil test and pH adjustment but remember the adjustment is to make aluminum in the soil available to the plant. That is why aluminum sulfate is often recommended to turn mopheads blue.

Hydrangeas need sunlight to bloom well. Some people don’t understand this because big leaf hydrangeas tend to “mope” or droop in the heat of a summer day. Hydration is important so the key is to make sure that the soil has organic material and moisture and nutrient retention capability while still being well drained. It is winter sun and wind that can do the damage. But during the growing season they do not need to be in a shaded area. It is with the macrophylla hydrangeas that in Michigan we will often see the buds swell along the stem during a nice early spring warm up only to get zapped by temperatures that drop overnight into the 20’s on a late April day. That is why if you’re providing some protection around the plant in winter avoid the temptation to take it off too early.

Hydrangea paniculata are also known as the “pee gee” hydrangeas. This species of hydrangea has panicle shaped flowers that look like cones so we call them Panicle hydrangeas.  The key is that they bloom on the same year’s wood so pruning timing is less critical. If pruning is needed prune after blooming or in early spring for beautiful blooms in August and September. These are some of the easiest hydrangeas to grow and can get to impressive size. New introductions like “Bobo” or “Little Lamb” are developed to stay smaller in size.

Hydrangea arborescens is a smooth operator. Known as “smooth” or Annabelle hydrangeas. They are native to North America and bloom on new or the same year’s wood making them a hardy reliable easy to grow plant.

Hydrangea serrata is a favorite of mine. A lacecap hydrangea also known as “Mountain” hydrangea. As opposed to being found in its native Asian element along seaside regions it is adapted to mountainous ranges. This gives us a tough bigleaf hydrangea with colorful blooms that tends to be tough and reliable in its blooming habits. The plant does bloom on old wood so again try to avoid pruning unless needed. I have had to protect this plant from deer browsing. Proven Winners has developed and promoted a mountain hydrangea that is aptly named ‘Tuff Stuff’ and it lives up to its name.

Hydrangea petiolaris is climbing hydrangea. I have it growing on a wooden fence as a set it and forget it plant. It is hardy, cold hardy to zone 4.

Hydrangea quercifolia rivals viburnums as my favorite flowering shrub. Native to North America this is a plant that gives 4 full seasons of interest in the landscape in a dramatic way. Also known as Oakleaf Hydrangea the plant has Oak leaf foliage in spring and beautiful white flowers in early summer. In fall it has dark burgundy foliage and in winter cinnamon exfoliating bark that protrudes through the white snow. It blooms on old wood so try to avoid pruning unless needed and it appreciates a little winter protection.