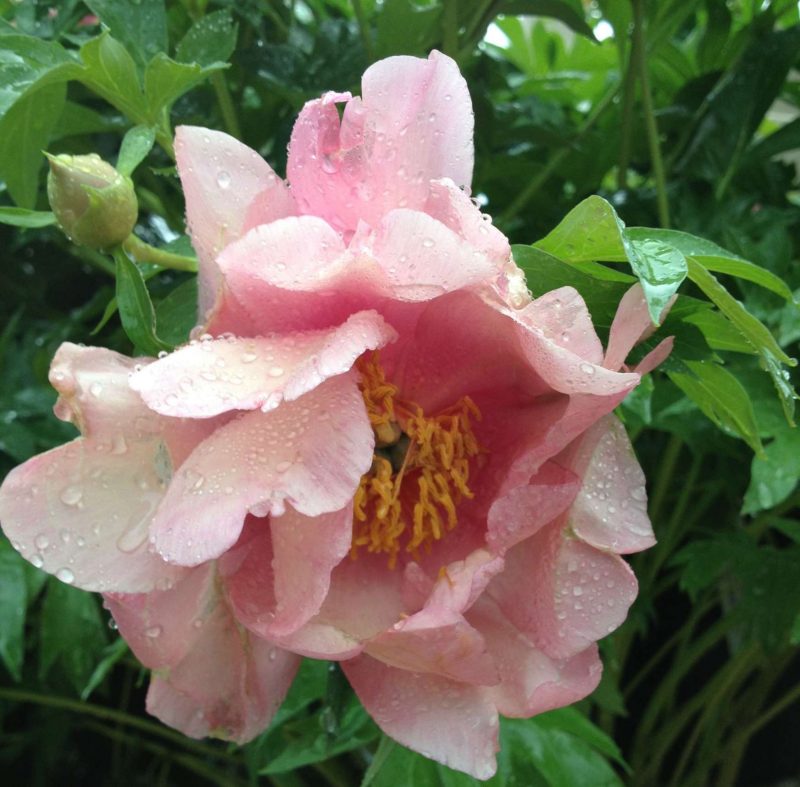 As a man changes his own nature, so does the attitude of the world change towards him.

When you quit but keep going you’re going through the motions and drag everyone else down with you. If you quit, start over. Failure is only the end if you give up. A failure is an opportunity for a new beginning.

Maybe it’s not a crisis but rather a drought, a dry spell, a period of unsuccessful attempts. In nature if you’ve gone through a dry patch, a drought, the anticipation of rain is rejuvenating. And if you love the smell of rain when it hits dry dirt the experience is amplified with the sensory pleasure. For most our olfactory receptors pick up and embrace that unique aroma. A mixture of fresh air and damp soil that has a name: Petrichor. Researchers believe that bacteria resting dormant in the soil releases tiny microbes into the air when they get doused with rainwater. During a springtime shower or summer thunderstorm, the air becomes perfumed with the fragrant molecules, causing petrichor. Bacteria, plants and even lightning can all play a role in the pleasant smell of clean air and wet earth. What you are smelling is a molecule, geosmin, made by a bacteria in healthy soils called streptomyces. Many antibiotics used today are made by a group of bacteria called streptomyces.

It turns out it’s not just gratitude that makes rain smell so appealing after a long period of dry weather.

When raindrops hit the ground it causes geosmin to be released into the air, making a walk after a storm a therapeutic nasal event. The word was coined from Greek petros, meaning “stone”, and ichor, meaning “the fluid that flows in the veins of the gods.” It just smells like gratitude.

“I work like a gardener,” the famous Spanish painter and sculptor Joan Miró wrote in his meditation on establishing a proper pace for your work. “Things come slowly… Things follow their natural course.” Well Miro never watched me work I thought. As a homeowner when you get home from work at night and have only a couple hours before dark, you learn to plant, mow, fertilize and trim at a frenetic pace. Forget supper there is weeding to do. Plants to water. Flowers to put in the ground. Edging to set. Your work is never done and you are up against the clock. The life of a working homeowning father who wants a nice yard. Plants maintain their pace however, namely perennials and woody plants like shrubs, evergreens and trees no matter how quickly I work. They have a biological clock that works at their pace. Gardeners have noted this in the form of a mnemonic that notes they “sleep, creep and leap.”

Mnemonics is an auditory aid that helps an individual remember something. Mnemonics can come in different forms including acronyms. As a Michigander we were taught “HOMES” to remember the Great Lakes: Huron, Ontario, Michigan, Erie, and Superior. As a horticulturist I was taught to remember the order of Taxonomy: kingdom, phylum, class, order, family, genus, species as “Kids prefer cheese over fried green spinach.” Or when I string and tune my guitar starting from the thickest, lowest-pitched string (the 6th string) at the top of neck  E A D G B E using the mnemonics “Eddie ate dynamite good bye Eddie. Or if I tuned from the thinnest highest pitched 1st string EBGDAE is “Easter bunnies get dizzy at Easter.” It just makes progressions easier to remember.

I enjoy creating acronyms but mnemonic poems can also stay with you throughout life. Especially the ones you were taught as a kid. Poems like, Red sky at night, Shepherd’s delight, Red sky in the morning shepherds warning. My Dad taught it to me as Red sky at night, sailors’ delight. Red sky in morning, sailors’ warning. Since then I’ve always loved a sunset sky bathed in red and am wary of an eastern red sky in the morning.

Gardeners have a mnemonic that proves to be true in the landscape and that is “sleep, creep, leap”.  Nature has its course and instant gratification is not one of them. If you’re a gardener it is best to cultivate patience when dealing with woody plants, trees, perennials and “long term” plants. Expect that its first year will be one of little apparent growth. In other words it “sleeps.” Hopefully the work is happening out of sight or underground as the root system works to establish the plant. One year later it is said that the plant “creeps.”

During the sleep and creep stage, for Type-A-personality gardeners the space between plants in the planted landscape presentation is wide and yawning and progress is painstakingly slow. Finally in the third, fourth or fifth year do the plants begin to fill their appointed space and look like a full garden. During the initial planting or in the sleep and creep years they are lured into the pitfall of over-planting to fill the uncomfortable space and methodical pace.To achieve the illusion of an “instant garden” the spacing recommendations for maturity are ignored and the space is filled. It’s like those who are bothered by uncomfortable moments of silence in a conversation and they try to fill the space instead of letting it breathe a little bit.  By the third “leap” year, plants are getting in one another’s way.  By the fifth year, shrubs that ought to be thriving and putting on a show are crowded, unhappy and in some cases showing you their vexation. Your pace didn’t match theirs and even though you think you’re in charge nature will show you its opinion via vegetation vexation. I see it all the time.

Sometimes it’s good to slow down. Gain perspective in the process. There is a pace that I don’t think I’ve ever learned. It doesn’t always have to be fast. An Eephus pitch is very slow and is used to catch the batter off guard. The pitch was invented by Rip Sewell of the Pittsburgh Pirates in the 1940s. The name Eephus pitch comes from the Hebrew word efes, which means “nothing.” A reminder that slow can sometimes be good. Not everything has to be rapid. It’s like a dopamine fast. It’s not always cliche to stop and smell the roses.

Kinesthetic people like me want to see everyone including themselves moving all the time. It’s not that they are not thoughtful…..they just do their best thinking when mowing the lawn, running, working. Vines tend to be kinesthetic characteristically. Always moving and growing. But an event, a stress, a change can stop them in their tracks and get them to refocus and bloom. A root pruning can get them to stop the incessant setting of tendrils in search of constant growth to instead do some flowering.

Talking to your plants

Talking to ourselves is completely within the norm in my opinion. Most of us talk to ourselves on a daily basis. Talking to your plants may only benefit them by the volume of carbon dioxide you are spewing from your mouth. They in turn will gift you with oxygen. I like talking to plants because it benefits me. In any situation or task when we talk to ourselves, it slows us down and helps us process our behavior. When dealing with a crisis or difficult situation if we’re talking to ourselves negatively, we’re more likely to engage in negative behavior. When our self talk is neutral as in a statement like “What do I need to do?” we slow down and reason our way through it more effectively. If your self talk is positive, like “I’ve got this” then the outcome is more effective, efficient and successful.  When between a rock and hard place do yourself a favor and talk to yourself. You’ll feel much better.