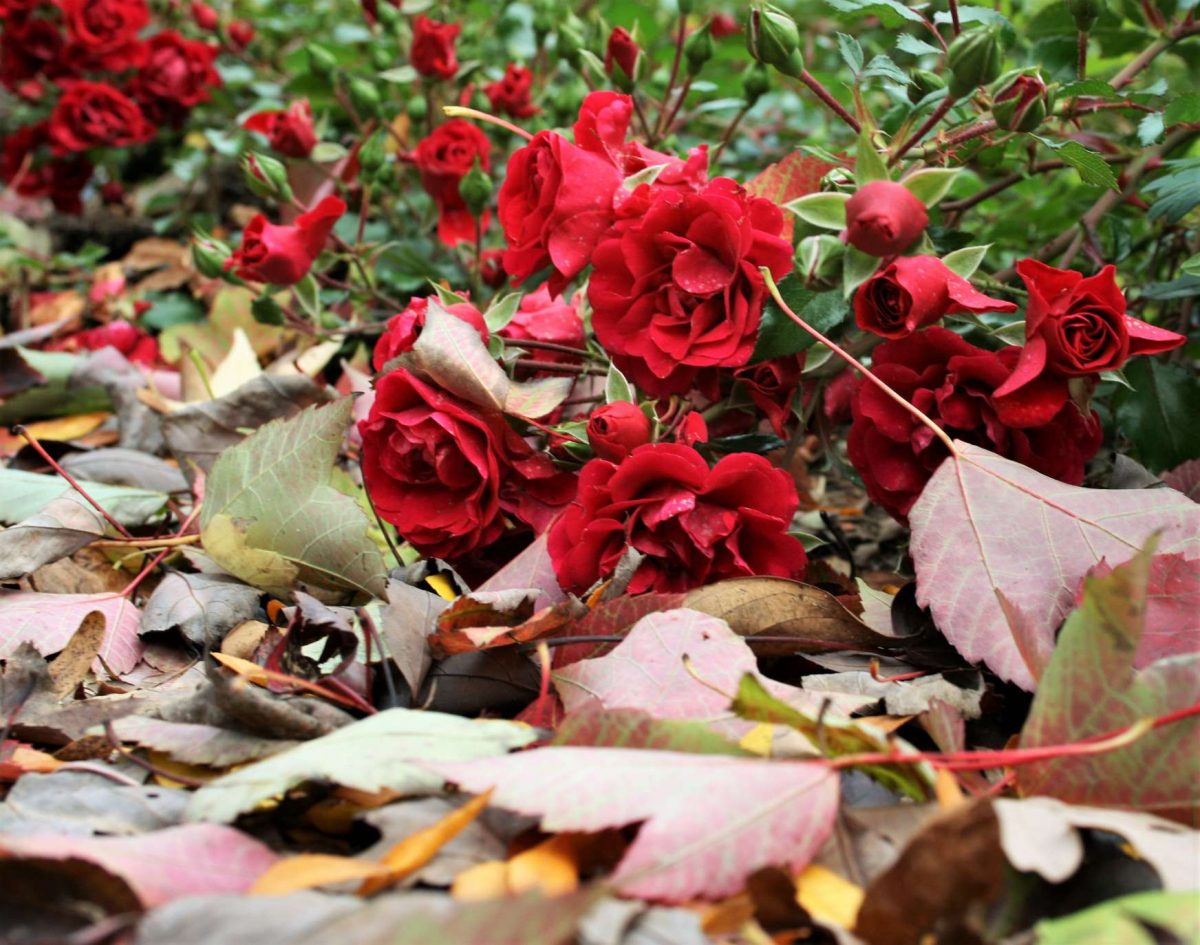 Show and tell time! Stacey brought along seed pods on a stem of Baptisia australis, also known as false indigo, and “played” them on air! The seed heads on this member of the bean family turn blackish-grey at the end of the growing season and make an appealing jingling sound when shaken. Rick says it sounds like Santa’s reindeer landing on your front lawn. Rick brought along some fresh holiday containers. These festive lakeshore containers featured white pine, spruce, red twig dogwood, driftwood, grass inflorescence and the branches of sassafras, the buds of which look like miniature ornaments! You can put gravel in the bottom of the containers for weight and then use some Oasis floral foam to fill the pot.

Many roses still have some foliage, buds and rose hips in late November. Today’s landscape roses like Oso Easy Urban Legend (featured by Stacey this week in plants on trial) are hardy to Zone 4 and do NOT need to be covered for winter protection. Don’t use plastic or covers that have no ventilation on your roses! Allow them to naturally shut down for winter. Unlike the old hybrid tea roses, landscape roses are grown on their “own-roots” (i.e., not grafted), so relax, no need to cover or worry.

Stacey and Rick put a new pest on your radar: the box tree moth, a new and serious pest of  boxwood. The caterpillars feed mostly on boxwood, and heavy infestations can defoliate host plants. Once the leaves are gone, larvae consume the bark, leading to girdling and plant death. Box tree moth caterpillars are green and yellow with white, yellow and black stripes and black spots. Box tree moths are generally white with a brown border and a white “comma” on each forewing. Box tree moth is native to East Asia and has become a serious invasive pest in Europe, where it continues to spread. In 2018, it was found in the Toronto area and now has been spotted in Michigan. Winter is a great time to learn about this pest and look for signs of it so you can destroy it if necessary.

Packing away your patio and deck furniture for winter? This episode’s word of the day is “lounge.” Yes, lounge. All these years, Rick thought he was packing away his chaise lounge for winter when it is actually a “chaise longue,” as the French intended. They are “long chairs” as  opposed to lounge chairs, even though that’s what we do on them. Hence, chaise longue, French for “long chair.” In the 20th century, as outdoor living and outdoor furniture rose in popularity, the chaise longue came along for the ride. The chair can be found everywhere from pool-side and dockside to cruise ships, on back patios, and gracing porches and terraces around the world.

Why? Because we’re talking about winterizing roses today, and, like all roses from Proven Winners ColorChoice Shrubs, Oso Easy Urban Legend is a hardy – down to USDA zone 4 – rose that’s not grafted, so it doesn’t need any special treatment whatsoever to survive winter here in Michigan, or even in colder climates where temperatures reach as low as -30°F. And what’s more, is that you wouldn’t want to because that would prevent birds and other wildlife from enjoy the hips, or berries, that this rose forms and persist through winter.

Landscape roses like the Oso Easy series do not need any deadheading – removing the old flowers – to bloom continuously. And that means that the flowers typically develop these large, round, red berries known as hips. They are edible for humans, though not necessarily particularly tasty, but birds and other wildlife love them because they are very high in vitamins and provide nourishment in winter. So, that’s how Oso Easy Urban Legend rose relates to today’s show, but let’s talk about what it will do for you during the growing season, and that’s a non-stop display of semi-double, true-red flowers. That’s where the name “Urban Legend” comes in, because, until it came on the market, there were no true red landscape roses, and everyone thought it was probably impossible. Sure, there were reddish landscape roses out there, but they all had quite a bit of pink in them so didn’t give the appearance of being that clear, true red people associate with roses. Semi-double means that there are multiple rings of petals, but the bright yellow center is plainly visible, which attracts and sustains pollinators as well as provides some appealing color contrast.

Oso Easy Urban Legend rose is also one of our most awarded roses! It has won four rose competitions for performance, including a prestigious Award of Excellence from the American Rose Society. So, you don’t just need to take our word that this is a rose worth growing!

Who? Oso Easy Urban Legend rose came to us from legendary rose breeder Chris Warner in the UK. He has developed literally hundreds of roses on the market, including eleven roses in the Proven Winners ColorChoice line. He works at his rather small nursery/greenhouse in rural Shropshire, England. He is especially devoted to developing disease resistant roses, and he goes so far as to take any plant parts he’s working with that get common diseases like black spot or powdery mildew and deliberately put them around his other plants to test for disease resistance. His approach to developing new roses is very similar to ours, which makes him a great partner in getting beautiful, easy-care roses to market.

How to grow: Making roses easy to grow is our primary goal – for too long, people associated them with spraying, staking, pruning….and while pruning is still important for good-looking roses (more on that in a moment), Oso Easy Urban Legend will not need to be sprayed to keep its dark green foliage clean and free of disease. It naturally grows with a tidy, ground-covering habit that’s perfect to transform any sunny spot into a low-maintenance flower carpet, or plant it along a walkway or at the front of a bed.

To get the best performance out of this or any rose, plant in full sun – that’s at least six hours of bright sunshine every day – and with good air circulation. Plenty of fresh air around the plant does a lot to prevent fungal diseases from appearing. And though roses benefit from regular watering, do avoid wetting the foliage unnecessarily, which also creates perfect conditions for disease to develop. Instead, water at the base of the plant.

As for pruning, it’s simple – just chop the whole plant back by about half its height or so in late winter/early spring. You can forget any fussy pruning advice you may have heard about other roses – it’s not necessary. But you do want to prune this rose, because that will ensure it is covered in flowers and maintains that neat, low-growing habit. If it’s not pruned, it will put out weak, spindly growth which will produce few flowers. By cutting the plant back to where bigger buds formed earlier in the season, you ensure thick, vigorous growth with lots of flowers.

Ready to add Oso Easy Urban Legend rose to your landscape or garden? Ask for this Proven Winners ColorChoice Shrub at your favorite local garden center.

Kathleen asks: I have been pruning a rose bush that was given to me by a friend for years 3-4. This year I had no flowers, why? They were small red flowers that bloom in a bouquet style. I live in zone 7.

Our first thought here is that your rose is getting too much shade. Roses need full sun – at least six hours of bright sunshine each day – in order to flower well. While the spot may have been sufficiently sunny when you planted your rose, it’s not uncommon for sites to grow more shaded over time as trees or other nearby plants grow. If you need to move your rose, early spring is a great time to do that. A second possibility to consider is that the flower buds are being eaten by deer or rabbits. Deer are surprisingly attracted to roses, and particularly like eating the flowers. They may do so without even really being noticed, so that’s worth considering too. Rick suggests it might be a fertilizing issue – if the foliage and stems you are seeing aren’t a good, deep green and growing vigorously, that could be an issue. Start applying a granular (not liquid) rose fertilizer in early spring, and continue through late July to see if that makes a difference.

Corey writes: I live in Michigan’s Upper Peninsula, and in 2021 I tried some new panicle hydrangeas. My new Bobos and Firelights bloomed at least a week before my new Quick Fire Fab… and several weeks before my old Limelights. Are the new varieties being bred to bloom early or was it just first-year luck? This could be a game-changer for those of us living Up North where the season is shorter! Any suggestions for other early-to-bloom hydrangeas?

Great question, Corey, and we’re pleased to tell you that  yes indeed, developing panicle hydrangeas that bloom earlier is a major breeding goal here at Proven Winners ColorChoice Shrubs. Panicle hydrangeas bloom based on accumulated heat – how much warmth they get through summer. This is why you’ll see them bloom at different times in different places (earlier in warm areas, later in cool ones) and also explains why, year to year, the bloom time can vary so much. In very cool climates, late blooming varieties like Limelight may not begin to flower until late August, and that’s no fun! It’s also no fun for growers, who of course aim to ship plants in bloom to garden centers during the main shopping season. So, for those reasons, we have been prioritizing earlier bloom times as we develop and select new varieties.

The chart below provides a rough timeline of when our thirteen varieties bloom through summer. Of course, when the actual plants in your yard bloom will vary a bit based on their siting. For example, a variety in more shade will bloom later than it would in sun. It also merits consideration that new plants will exhibit a different bloom time than those that have been in your yard for a full season, because when they bloom will depend on the conditions at the grower prior to shipping.

A few horticultural highlights from Paris: