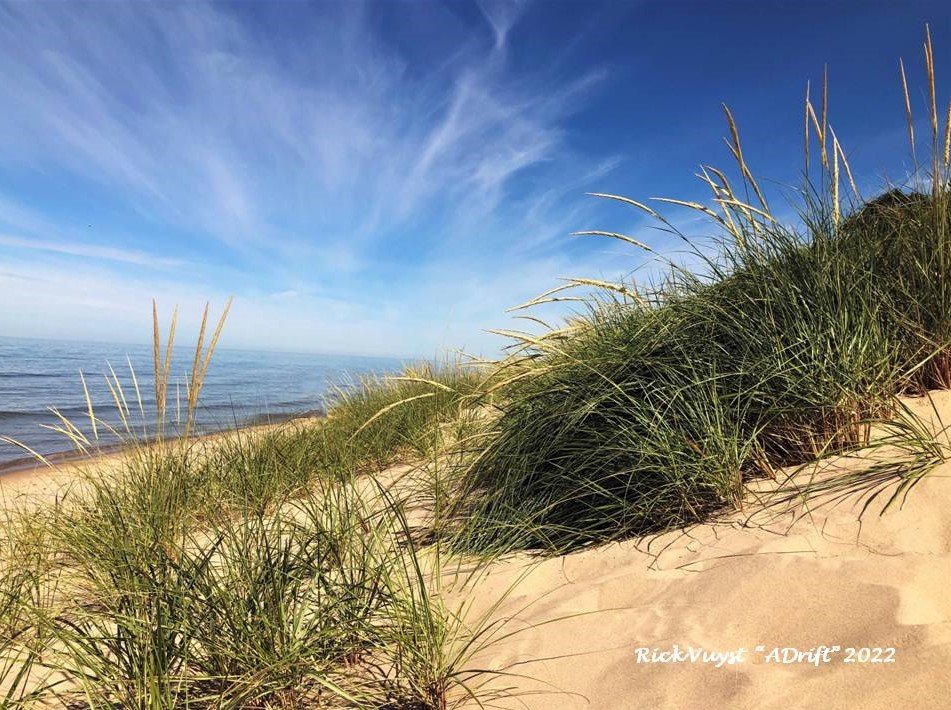 In my third book I wrote about how plants throughout history have saved the day. As I walked the beach yesterday that same thought came to mind as I observe “beach grass” establish a foothold on the foredunes along the beach. Marram grass is the first line of defense when it comes to erosion along shoreline dunes.

I took this photo while walking the beach. It’s a good example of the August inflorescence of Marram grass (Ammophila breviligulata). Marram grass is usually the first vegetation to appear on beaches and the foredunes. The stems and blades of the grass act like a “snow fence” and allow the sand to begin accumulating as the dunes rebuild after a high water erosion event (2019/2020). In August the flowering tufts make it easy to distinguish it at a glance from Sand Reed grass (Calamovilfa longifolia) and its “Panicum-looking tufts” also growing along the linear foredunes. Sand grains are ever moving via saltation, picked up by the wind and dropped in a cycling repetitive motion. Saltation is a word used in biology and geology. The dictionary describes it as such:

the movement of hard particles such as sand over an uneven surface in a turbulent flow of air or water.

It’s fascinating to watch the Marram grass form the first line of defense against erosion caused by wind and water. It makes sense as the appearance of the dunes is caused by  prevailing winds. Offshore breezes and winds create waves that move sand into sandbars and moves sand on shore. After the sand dries the wind then blows the fine particles further inland in the process called saltation.

Because weather generally moves from west to east (not always) shorelines like mine that face west (the east coast of Lake Michigan) experience almost constant winds. (That’s why there are so few dune areas on the Wisconsin/Chicago side of Lake Michigan). Even a gentle breeze is all that is needed to carry sand up even steep dunes. The active migrating dunes are usually found only within 1 to 1.5 mile of Lake Michigan inland. Further inland the wind loses energy starting with the “backdunes” allowing plants and trees and vegetation to establish and stabilize the soil.

My photography primarily takes place along linear dunes which most of us would call the typical beach dunes we enjoy in summer. An undulating dune and swale ridge and slope of sand that runs parallel to the lake and shoreline with heights varying from 10 feet to as much as 50 feet or more. One of the dunes near my home rises more than 100 feet above Lake Michigan and experienced extensive erosion and change during 2019/2020. Some dunes” in the area are built with significant sand due to their location. “Mount Baldy” just to the south of my home at Hoffmaster State Park is a dune estimated at 230 feet. A continuous supply of sand via winds are carried to the top. When high waters and waves cut away at the base of these dunes, especially the impressive taller dunes, the collapse of their foundation can be quite dramatic. When periods of high water remove plant cover like Marram grasses and trees it exposes sand to westerly winds. In some cases a destablilized U-shaped dune now perpendicular to the shoreline becomes what is commonly known as a  “blowout”.

The coastal dune habitat primarily consists of four zones: The beach, the foredune, troughs and the backdune area (where I live). The beach zone is a harsh habitat where wind velocity is the greatest, sunlight is intense and waves flood the area. That’s why you don’t generally find plants or animals there. Next comes the foredune beyond the beach. This is where you will often see signs saying “Please stay off the dunes to prevent erosion” at State parks. Stay on designated trails. 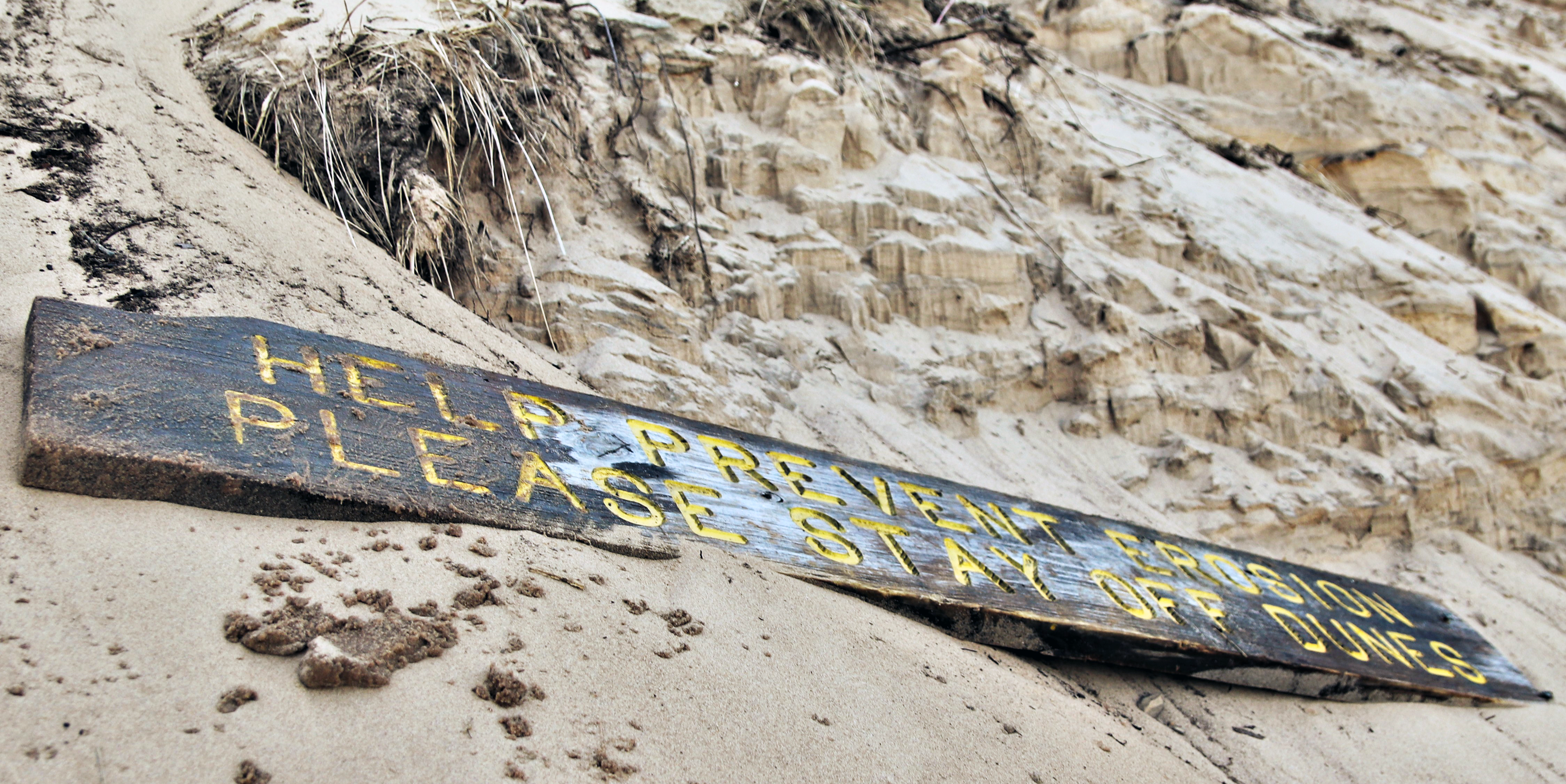 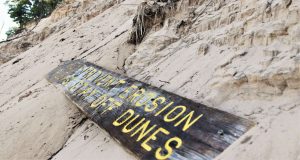 Sand can take hold and build on these foredunes because what is commonly called “beach grass” takes hold and begins the sand accumulation. Wind moves sand but vegetation stops it. Marram grass is usually the first to appear on bare dunes. The stems and blades of the grass slow down the wind and can cause sand to begin accumulating. As sand buries the marram grass it continually sends out new shoots and underground rhizomes to continue to grow despite tough conditions for a plant. Instead of shifting dunes they can become more stable hills of increasing height. Once a dune is stabilized I start to see red-osier dogwood, common milkweed, some oak and white pine, juniper and non-native spotted knapweed. Spotted knapweed is a native of Europe and Asia. It was introduced to North America in the 1890s as a contaminant in agricultural seed and through soil discarded from ship ballast. It has become a serious problem of pastures and rangeland in the western United States.

You will also see sand reed grass Calamovilfa longifolia an important sand-binder of the dunes and beaches of the Great Lakes which looks like but is not Panicum (commonly called “Switchgrass”) When you reach mid August it’s easy to differentiate the marram from the sand reed grass due to their distinctive inflorescence. The dense, spiky tufts of Marram grass are a familiar sight on our windswept coasts in August. Marram grass was once harvested and weaved into mats for barn roofs, nets for fishing and even shoes.

Sheltered among the foredunes are occasional troughs and then behind the protection of the foredunes are the backdunes where the elements are less extreme. This allows trees like oak, sassafras, pine, beech, aspen and hemlock to grow. A number of these trees have come under attack in recent years by invasive non-native species of insects and disease threatening their important role in providing a haven for wildlife and people on the backdune.

Coastal sand dunes are fragile places, ever changing ever evolving. Without the humus of clay or fortification of stone the sand quickly changes shape and structure by wind, water and human activity. My photography for the exhibit “ADrift” is based on the significant pattern shift of the dunes when significant wet weather along the Great Lakes basin and record water levels on the Great Lakes caused dramatic erosion of these fragile places in 2019 and 2020. Now that lake levels have receded from their peak levels we can watch Marram grass begin to take hold of the dunes and like plants always do…..save the day.