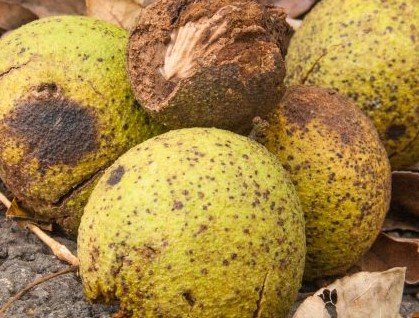 Competition is a good thing but with plants, like people, to undercut damage and diminish another for their own advancement is well just nasty. It’s toxic. When it comes to this behavior the allelopathy role model, centerpiece and poster child has got to be the Black Walnut tree Juglans nigra. Plant allelopathy is when a plant uses chemical warfare to suppress others and then take advantage of them. This is not team play in the neighborhood. Allelopathy comes from a couple of Greek words, allelon meaning each other and pathos meaning to suffer.
Black walnuts produce a chemical called juglone that is present in all parts of the tree but especially in the nut hulls and in the roots. Symptoms of black walnut toxicity include leaf yellowing, wilting, stunted growth and eventual death. Many plants are sensitive to juglone and sensitivity training is not about to help. They create an adverse environment that is toxic to many plants in relative proximity to their surroundings. A quiet insidious toxic behavior that slowly but surely erodes life around you. Sound familiar in some workplace environments? You can probably name the “black walnut” personality hanging out at the coffee pot in your office.
The black walnut was part of Native American diets but most of the walnuts we eat today are English Walnuts. They are milder and have thinner easier to crack shells. Black walnuts have an unmistakable earthy flavor which is a nice way of saying please don’t ruin my fudge by putting them in there.

If its toxic behavior towards others isn’t enough to make you dislike them, their fruits inimical behavior will turn you against them. Black walnuts have a lime green husk and they look somewhat innocent like big round limes hanging in the tree. That’s where the good feelings end. The nuts will stain the dickens out of everything from the dents in your car to the sidewalk and driveway when they begin their bombing sortie on your property. I wouldn’t even park a rental car under a black walnut tree. The lime balls nestle in your lawn and will trash your mower becoming projectiles that might break a kneecap or a window in the process. Step on them before they become brownish slimy goo and you’ll twist an ankle. The husk contains the chemical called juglone but even worse than its toxic behavior or ability to stain the daylights out of anything is the aroma. A bitter pungent distinctive smell these odd smelling lime nut balls smell like blue cheese gone awry. They smell like a musty room with bad cheese mixed with a twist of citrus. A gym bag with used workout clothes, old running shoes and spilled energy drink left zipped in the bag for a month sitting in the back seat of a hot car.

As kids in September and October we would use shovel handles and hit them like baseballs in the field for hours on end. Our nostrils had not yet developed the sensitivity needed to abstain from this behavior. We would fantasize stepping up to the plate and getting a hold of one for a game winning walk off home run in the World Series. After batting practice you could pick the lime green shrapnel and bits from your arms and face. I’m sure Mom was disgusted by the aroma of our clothes that ended up in the washing machine. Maybe she threw them out, I don’t remember. We had fun and the lime orbs also made for epic fruit fights until someone took one to the forehead.
Black walnuts shed their leaves, nuts and copious amounts of twigs and branches in September and October. I owned a home with multiple trees on someone else’s plot adjoining my property. I schemed in my mind how I could eliminate the trees without anyone knowing even though they were just over the property line. I would sit in my chair in the dark looking out at those trees at night conspiring a strategy to deploy. Rocking back and forth staring off into space I had crossed over to the dark side. Believe me it took every ounce of diplomacy I could render to keep from starting a ground war. All the neighbors loved the trees for the shade they produced. I was a lonely rebel with a cause left out standing in the field. The neighborhood watch group was watching my every move. The siege dragged on from weeks to months to years. They saw shade and beauty, I saw firewood. The squirrels would sit in the trees chattering and laughing at me. 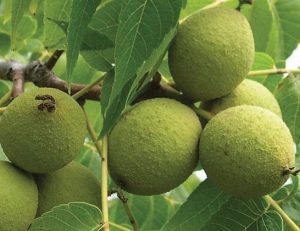 I could deal with the neighbors but not the squirrels. Squirrels go crazy in September and October. If not crazy already with their antics dodging traffic in the middle of the road and chewing on electrical wires and propane gas grill hoses all summer long, in fall they go nuts on this lime green fruit. Squirrels have sharp teeth and are persistent. When it comes to black walnuts anything I have to drive over to hull with my car in the driveway before I can eat is too much work and I certainly don’t have the patience. Squirrels have nothing else to do however aside from raiding the bird feeders so they will hull nuts all day long. Squirrels are excellent propagators of black walnut trees. I’ve observed them rubbing the nuts against their head to mark their scent on their find. They then plant them everywhere only to lose their placement when hungry in winter. The end result is a bumper crop of new walnut trees the following year growing in your garden, your lawn and out of the foundation of the house.
As you can tell I use my view of black walnut trees as an analogy to toxic relationships in my life. Having to deal with certain people I dislike I simply envision them as a black walnut tree. It truly is quite helpful you should try it. When they start to seep their juglone in my space I picture them as a big walnut tree. They can bark, go out on a limb and bomb me with the fruits of their attitude. I move beyond the shade they cast. Negativity, suppression, subversion, sabotage are all toxic behaviors and when you hang around you become a product of their environment. Next time someone toxic tries to shade your day, picture them as a big old gnarly messy tree and “leaf” the area.