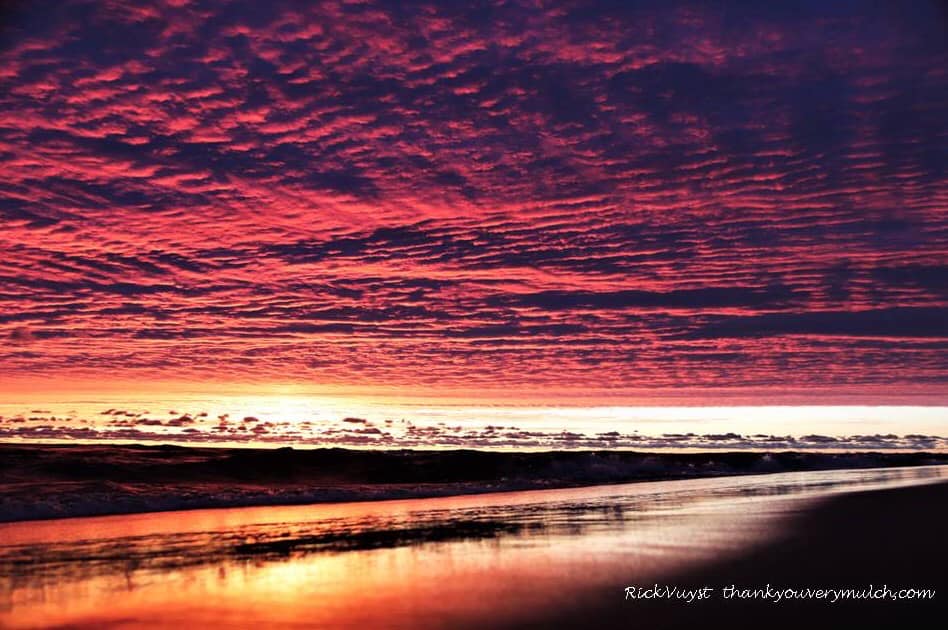 It’s not a “figleaf” of my imagination that sunsets are more colorful during the fall season. Color is on our minds due to the changing of foliage colors. After years of taking pictures on the Lake Michigan shoreline I thought it was just a figment of my imagination that they seemed more vibrant and colorful. I was reminded there’s science that explains sunsets. Fall and winter generally produce beautiful sunsets. I was reminded of that science when shooting the picture below on September 22, 2021 on Pere Marquette Beach.

Some particles in the atmosphere are required to produce orange and red low-sun colors. But when the lower atmosphere where I’m shooting my pictures has an abundance of dust, pollen, pollution or small water droplets, those particles actually reduce the brightness of the sunlight.

Some years in August when there are Western wildfires we see a red and orange glow to the summer sunset, an almost spooky hazy look. But in fall and winter rather than pollution, it’s clean air that is the main ingredient common to brightly colored sunrises and sunsets. In fall and winter, weather patterns usually result in a clearer lower atmosphere, creating a better chance for a vivid sunset. Then if there are clouds to reflect the light when the sun has set it can create an amazing colorful airborne canvas.

Because air circulation is more sluggish during the summer, and because the photochemical reactions which result in the formation smog at that time of the year, late fall and winter are the most favored times for sunrise and sunset pictures.

As the sun dips down over the horizon, sunlight has to pass through a thicker layer of the atmosphere compared to the daytime. This causes the blue light that is seen during the daytime to be scattered away from our eyes, allowing more orange and red light to pass through. Often the essence of a beautiful sunset is in the cloud layer specifically the clouds at the upper and lower levels. The brilliant colors that are reflected in the clouds take on the red and orange hues of the setting sun (as seen in the picture I took above).