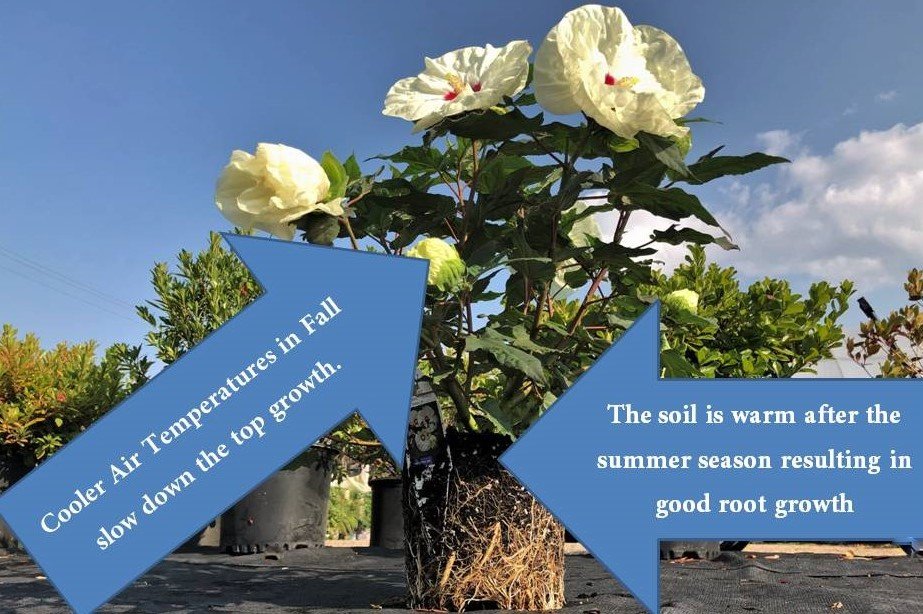 As the month of August comes to a close we enter a new season for the yard and garden. A season of opportunity. The months of September and October are ideal for plant establishment because roots are active during this period. Plants slow their focus on “top growth” which is primarily in the spring and summer seasons, and focus on root growth heading into fall. Even though air temperatures begin to drop heading towards October, soil temperatures remain warm for some time to come. Plants, trees, shrubs begin to send generated food reserves produced by the foliage into the root system. With less effort being expended on top growth, with warm soil and fall rain, the roots are in for a “root awakening.”

A plant is “established” when it has grown enough roots to gather the water and nutrients it needs from the surrounding soil. Widespread roots anchor it securely in the ground. In an established plant, “the roots spread out much farther than you probably realize. The root system of a plant performs many vital functions. In winter, it is a store-house for essential food reserves needed by the plant to produce spring foliage. Roots absorb and transport collected water and minerals from the soil to the rest of the plant when it calls for it. Roots anchor the portion of the plant above ground. Obviously based on size some plants need more anchoring than others. It is important to keep the portion above ground healthy to ensure an adequate food supply for the roots to continue their important functions. Think about a large tree. The USDA Forest Service says a healthy 100 foot tall tree has about 200,000 leaves. If you don’t believe me  I guess you’ll have to count them. A tree that size can take 11,000 gallons of water from the soil over the course of a growing season and release it into the air again as oxygen and water vapor! Thousands of thread like columns of water charged with minerals ascend the trunk through the Xylem.

Aside from the “anchor roots” the “feeder roots” that absorb water and nutrients  are often so fine almost microscopic that you can hardly see them. The plants we sell grown in a pot comes with its entire root system which is a good thing however that root system is small. That tight circle of roots needs to extend out into the soil to give the plant a foothold. You can encourage extension into the soil profile by making sure the surrounding soil is not compacted and by gently pulling circling roots to a more open or extended position when placing the plant in the hole you have prepared.

It’s important to remember that most of this activity occurs near the soil surface for plants. Root functions include water and mineral conduction, food and water storage, and anchorage in the upper profile of the soil, not down deep. “Feeder roots” are small and almost microscopic and yet constitute a large part of the root system’s surface area. These smaller roots grow outward and predominantly upward from the large roots near the soil surface, where minerals, water and oxygen are relatively abundant. The major function of feeder roots is the absorption of water and minerals.

Roots grow where water, minerals AND oxygen are found in the soil and allow root growth. Roots need some water and oxygen but if soils are saturated with water, most roots will die. Because oxygen is usually located in the upper surface layer of soil, the largest concentration of feeder roots exists in this zone. I recommend a root stimulator and plant starter at the time of planting. Bonide’s “Root & Grow” is an excellent choice and easy to use for this purpose.

Other factors that determine root growth include soil compaction (reduction in air pockets resulting from soil particles being packed together) and soil temperature. In some instances, hard, compacted soil can occur near the surface, which restricts root growth. It’s why we say a moist but well drained soil is key to good establishment. Plants will suffer in compacted soils with little oxygen.

Soil preparation is a key to success with plant establishment. Establishment is easier in fall, that’s why we say your yard and garden is in for a “root awakening” in the coming months.