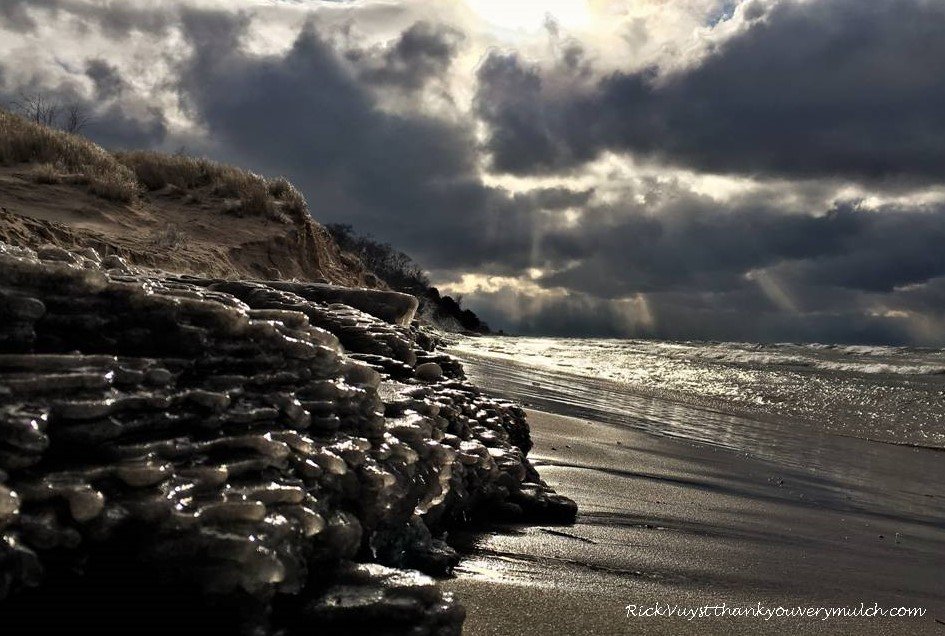 Excerpt from my new book: ‘I Need To Change My Plants’

I climb the forested back dune as the roar of the wind sails across the treetops above me. The muffled rumble of the waves can be heard in the distance as I make my way to the top. Once I crest the dune the wind hits me in the face with all its unobstructed force. I have the wind speed at about 20 knots on the foredune and down to the beach, the cold late December wind pelting me with gusts of airborne sand particles. Living along the Lake Michigan shoreline it is a Christmas eve tradition for me to walk to the shoreline regardless of the weather and look for the Rouse Simmons. Some call it the Christmas Tree Ship others call it the Ghost ship. Legend has it you can spot the ship or hear the ship’s bells if in the right place at the right time sometime between Christmas eve and dawn Christmas morning. I envision the old schooner fighting the wind and the waves with tattered sails foundering in the water. I face into the northwest wind looking towards Wisconsin but yet again this year to no avail. I turn to begin the ascent of the foredune with its frozen marram and sand reed grass glistening on the bank. The goal now simply to clear the crest to the protection of the back dune freed from the icy blast.

Built just after the Civil War in 1868 by Allen, McClelland & Co. in Milwaukee Wisconsin, by 1912, the Rouse Simmons was one of the last vessels still sailing Lake Michigan in the golden age of sail. Grandiose schooners at the time with their wind swept sails they filled Great Lakes harbors. In 1912 sailing vessels such as the Christmas Tree Ship were nearly extinct about to be sidelined by advances in technology. A three mast schooner with a hull made of wood,124.2 feet in length, 27.6 feet in breadth and 10.1 feet in depth of hold, the creaking wooden schooner must have been a sight to see sailing low in the water loaded with Christmas trees inroute to Chicago.The Rouse Simmons captain Herman Schuenemann inherited the moniker Captain Santa for his exploits navigating Lake Michigan’s tempestuous attitude in November to pick up a load of Christmas trees from Northern Michigan and return them to the Clark Street bridge in Chicago. In the late 19th and early 20th century, the popular German tradition of decorating an evergreen tree in the home was now rooted in our culture and widely practiced. It made the entrepreneur’s risky venture of a late season voyage on the lake worth the gamble to deliver Christmas cheer. Herman would sell them along with giving some to needy families. Schuenemann gave away many of his trees to the city’s churches and poor. Over time his benevolence earned him both respect and the moniker Captain Santa.

The Rouse Simmons had sailed for the Great Lakes lumber trade for years. Lumber mills had circled the interior Muskegon lake where I live and was big business in the late 19th century. At the time transport via sailing ships was an efficient way to bring the resource to growing cities like Chicago. It was only natural that despite the threat of tumultuous waves and weather, without the weather predicting capabilities we have today, the danger of transporting Christmas trees in November was a natural offshoot for commerce.

By 1912 the Rouse Simmons was an archaic and tired vessel but still functional depending on who you asked. Legend had it maybe Schuenemann didn’t have the funds to do the necessary maintenance but saw an opportunity because winter weather had caused other ships to hesitate or cancel their voyage for trees. He saw it as an opportunity to make some extra profit and pay off his debts. He felt if the ship was loaded including the top deck with thousands of trees it could be a payday for him. Instead the deck was stacked against him. Rats are wily and wary mariners and were deserting the ship, a sign to the sailors on board the ship was ill fated and about to meet its destiny.

I imagine for Schunamen purchasing an aged schooner would be profitable if he could wring the last bit of life from the tired vessel. You would also think that trees or lumber as exposed cargo would not be damaged or affected by weather and that they are somewhat buoyant compared to other commodities. Yet with the hull full on a leaky schooner and top deck loaded the wet and ice covered trees would add a lot of weight. With eight feet of trees piled exposed on the deck it is surmised it may have destabilized the craft. I have read accounts where those who witnessed it’s departure from Thompson Michigan to head south observed the vessel with less than a foot of freeboard above the water line due to the weight of the trees. A floating forest.

Before departure, Schuenemann invited a number of lumberjacks aboard to catch a ride back to Chicago to spend the holidays with friends and family. From all accounts it appears he was a kind hearted soul who embraced his reputation as Captain Santa. With the Rouse Simmons, now fully loaded with evergreen Christmas trees, Captain Schuenemann knew the dangers of sailing in November, but the Christmas tree merchant had to get trees to Chicago. The clock was ticking and the Christmas season was on its way.

With barometric pressure dropping and the winds increasing, the winds and waves battered the ship as the Great Lakes often do in November. Two men checking the lashings on the trees and a small life boat were swept overboard along with a number of trees never to be seen again.The Rouse Simmons was spotted flying a distress flag, flying its flag at half-mast, a universal sign of distress five miles offshore while being driven southward by a northwest gale. Driven by the northwest winds I can only imagine what it was like on board. As one who lives on the Lake Michigan shoreline and has personally witnessed the lake acting more like an ocean than a lake, its power and a cold northwest wind is unforgiving and relentless, especially in November. A rescue boat was sent out to find them as they were reportedly spotted in the far distance riding dangerously low in the churning waters. A lifeboat was dispatched from Two Rivers Wisconsin in the hopes of intercepting the south bound Simmons to bring the crew to safety. The lifeboat never found the vessel and crew. The Rouse Simmons had vanished, slipping below the surface deep into the cold waters of the big lake. The three-masted schooner went down on the afternoon of Nov. 23, 1912 and laid to rest in roughly 165 feet depth of water. I have seen varying accounts of how many died that fateful day going down with the Rouse Simmons and its cargo of Christmas trees. It is not well documented exactly how many lost their lives but estimates are eleven or twelve sailors, some lumberjacks along for the ride, co-owner Captain Charles Nelson of Chicago and one Herman Shueneman, Captain Santa. It is believed a ship will scream out after it is lost at sea. Maybe it’s the sound of air escaping from the hold of the ship when crushed by the pressure and weight of the depths, a tragic sound bemoaning the loss of human life.

Upwelling for decades would stir up the lake bottom causing trees presumed from the Rouse Simmons ill fated cargo as fragments of trees to appear in the water and on the shore. Even in the disaster Hermann Schueneman was delivering his trees. When winds blow across the lake’s surface pushing surface water away, water then rises up from beneath the surface to replace the water that was pushed away. This process is known as upwelling. We experience upwelling events along the lakeshore where I live from time to time in summer. One July day the water can be a swimmable 70 degrees and the next a frigid 40 or 50 something degrees after an upwelling event. When you feel the frigid water at a temperature very unlike the surface water you can imagine the evergreens would have retained their needles for a long period of time. And as noted in legend and song the Great Lakes never gives up her dead. Hermann’s body was never recovered but his wallet was netted by a fisherman in 1924 complete with newspaper clippings of his exploits as Captain Santa. It was well preserved even though it had been submerged for 12 years at that point.

It’s considered good luck to nail a horseshoe to a vessel with the open end pointed up “to hold the good luck in.” When the Rouse Simmons was eventually discovered by a diver in Lake Michigan in 1971 the horseshoe was hanging upside down by a single nail. The aging schooner’s luck had run out.

Over the years, the schooner’s disappearance spawned legends and tales that grew ever larger with the passage of time. Sailors believe a ship has a soul of its own. Through the years some Lake Michigan mariners have claimed to have spotted the Rouse Simmons appearing out of nowhere. Phantom ship bells are heard. Therein my imagination and annual Christmas eve jaunt over the dune. Through the years looking to the northwest in the direction of Manitowoc and Two Creeks Wisconsin on Christmas Eve or Christmas morning before dawn, I have never caught a glimpse of the ghost ship. It is said if lucky enough to have a moonlit night you can catch a glimpse of her with her sails ripped to tatters and wildly flapping about as if blown by gale force winds.

Today for many the journey of the Rouse Simmons did not end below the surface of Lake Michigan but rather continues as a story and a legacy of how someone was trying to make an impact and found joy in the journey, even if ill fated at that. It’s another example of why I say history and storytelling is so important. It leaves a mark. In our personal sojourn the journey and adventure of others teaches us to daily embrace our wayfaring ways. Many times the best part is the anticipation. The pilgrimage, the process of getting there. Together. The gift is the journey. When I was younger the process knew better than me that it’s about the process. Now with seasoning I know better. There is joy in the journey. Something I wish I had been taught in my earlier years. Instead of viewing change as “inevitable” in a foreboding kind of way….change is the dose of magic in our personal odyssey and simply enhances the important memories of “the good old days” as a foundation. Once you believe in magic……. each day becomes a gift.