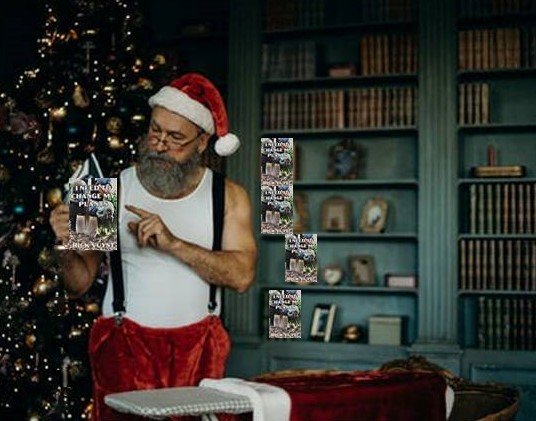 He’s making his lists and checking them twice so don’t get caught with your plants down.

Excerpt from my new book: ‘I Need to Change My Plants’

“When I was young in the 1960’s the solution to the needle conundrum was aluminum artificial trees. Space age fashion, the birthplace of this new age shimmering fad, was in Manitowoc Wisconsin which sits on the shore of Lake Michigan about 80 miles north of Milwaukee. A symbol of 1960’s kitsch the gaudy glamour was affordably available to all in silvery aluminum or pink, green or blue.

The Aluminum tree could be accessorized with a spinning color wheel set on the shag carpeted floor and illuminated by a burning hot incandescent light bulb. The bulb would illuminate the spinning colors on the wheel plugged into a socket to rotate and magically change the tree’s appearance. I inherited one just a few years ago and the receipt was still in the box. Purchased at an after Christmas sale the price paid was $1.25 plus tax. I plugged it in and still functional, it became very hot, reminiscent of the old easy bake ovens kids would get as gifts at that time. I unplugged it before it started a fire and donated it to an antique collector who would revel in the nostalgic benevolence.

The aluminum tree and rotating wheel if anything, when positioned close to the old television sporting all of three channels and rabbit ears antennas, improved the TV’s reception. That’s a good thing as about that time we would all gather around and view what starting in 1965 became a household tradition and national sensation, watching the CBS Christmas special “A Charlie Brown Christmas.”