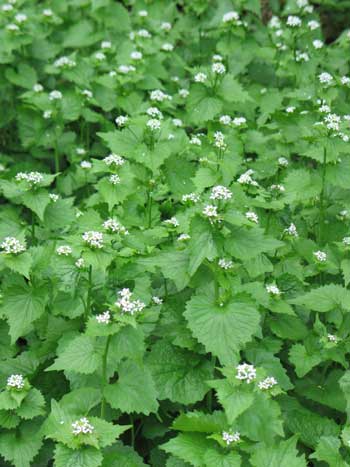 I will be interviewing Ginny Sines of the Kent County Parks Department on my radio show this week about the spring volunteer effort to control invasive species, namely Garlic Mustard and Dames Rocket. These invasive species need to be hand pulled in the cool spring weather before they go to seed. Both these plants left unchecked can produce copious amounts (as in thousands of seeds) for future generations. Garlic Mustard has a biennial habit that allows the plant to optimize growth before native vegetation greens up to shade them while sewing thousands of seeds with each mother plant. The bad news is Hesperis matronalis or Dames Rocket has the same ability but less hated by the casual observer who find them “pretty” as wildflowers. Hesperis matronalis was introduced from Europe as an ornamental around the time of European settlement. It continues to be widely used as an ornamental and can be found throughout North America. It’s “pervasive invasive” habit chokes out other native plants and can change wild natural habitats.