Nothing like a sunny day. Visions of planting flowers, wearing shorts and playing in the dirt. “Grow” ahead and make my day. Does it feel different this spring however? It’s not a “fig leaf” of your imagination….what a difference a year makes. This bud’s for you.

A very unusually warm March and April in 2010 got us out in the yard planting and fertilizing with reckless abandon last year….this year a different story. Below average temperatures have caused a very different accumulation of “Growing Degree Days” also known as GDD. Stick with me here because I’m going to show you why landscape frolicking has been limited in spring 2011.

Accumulating warm temperatures on a daily basis starting March 1 of each season build what we call GDD….Growing Degree Days. Woody plants like your Lilacs in our part of the country generally break dormancy and become active in the 45 to 55 degree range. To standardize GDD settles on 50 degrees as the “base” from which to calculate. Growing degree days are then calculated each day by taking the maximum temperature for the day plus the minimum temperature for the day and dividing by 2. Any day where the total is above the base of 50 gives you Growing Degree Days. For example if in a given day in early April the high temperature is 64 degrees and the low temperature is 40 then 64 + 40 = 104 divided by 2 = 52. 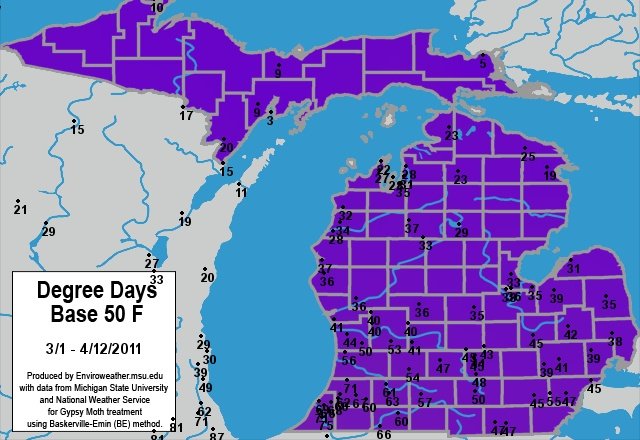 Congratulations you just added 2 growing degree days above the base of 50. If we have some nice warm sunny days GDD can accumulate quickly causing both the plants and the bugs to become active.

Spring 2010 was highly unusual with warm sunny weather in March and April. Spring 2011 has been unusually cold with temps running below average seasonal levels. From March 30 to April 13 in 2010 we accumulated 96 GDD while in the same period in 2011 34 GDD….a difference of 62 growing degree days in just 14 days! The average for this period would be 38.2 GDD. In 2010 we were accumulating at a rate of 6.85 GDD per day and this year 2.42 GDD. If you take the difference of 62 growing degree days between last year and this year and divide by the rate we are warming up this year (2.42 per day) the number is 25.61. To get to the root of the issue the 25.61 days means we are between 3 to 4 weeks behind last year in the landscape! Amazing when you combine soil temperatures that are significantly lagging 2010 temperatures……see…..it was not a “fig leaf” of your imagination!

Last year’s unusually early warm weather then cold snap in early May was not healthy for plants and crops. We saw a lot of damage because of it. This year we will see a more normal, however slow by average standards, waking up of our lawns and landscape plants. If you feel your fun in the sun this year has been lacking you’re right, the GDD calculation proves it. Make your plans and wait patiently….it will come…and when it does “Grow” ahead and make my day.