Here’s some recommended reading while we endure the cold of winter. ‘Lives of the Trees…An Uncommon History’ by Diana Wells. This book is perfect for “tree huggers” like me……entertaining and not too technical….without going out on a “limb” it’s exactly that…..entertaining. 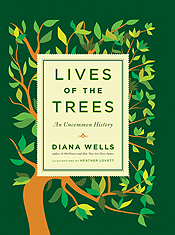 On my radio sh0w we’ll be talking to Diana touching on just a few of the many highlights in the book peppered with a sense of “humus”. For example………..

I recommend this book to Nature and Tree lovers or those looking for a fun read during the winter months……Diana Wells will join us on the Flowerland Show on Saturday December 12.