Thinking about taking advantage of some nice November weekend weather to hang some “electric ivy” around the house? When lighting the shrubs do you decorate like the Griswolds or do you take the “chuck and duck” approach pitching them into the landscape and plugging them in? Remember what goes up must come down. Keeping up with the next door neighbor can be a challenge as evident from this picture from last year. 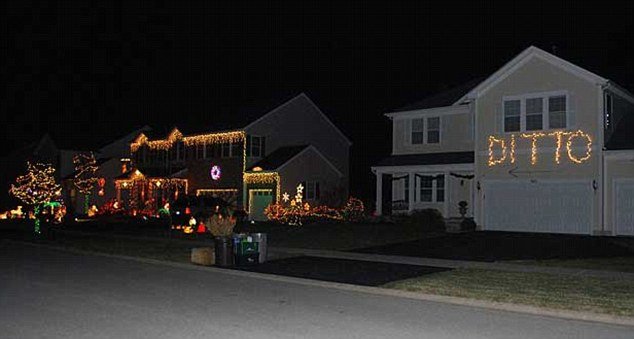 If your neighbor is a little over the top when it comes to decorating a “Ditto” approach may save some yuletide sanity. Besides……you do all the work and the fat guy in the red suit gets all the credit.

Thank goodness in my opinion for LED lights. I would always step on the bulbs while tangling with the lights but now LED lights are virtually indestructible. They’re cool to the touch, energy efficient (80% to 90% less energy) and long lived……”yule” get years out of them! The best part however is you can string bunches of them together and not feel guilty about it…..the package of GE LED lights I’m looking at tells me I can string or connect up to 25 sets together! Takes the adventure or “challenge” out of seeing how many old C9 lights I could string together without blowing fuses or breakers. Of course hanging lights for festive cheer has it’s challenges. This person in Royal Oak caused quite a commotion with her exhibit…. 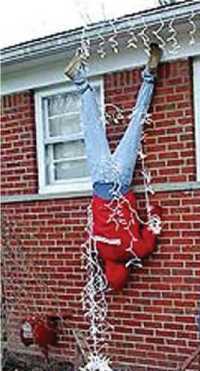 eventually having to take it down due to the number of 911 calls being made to officials. Give them a 10 for “creativity” at least…..

When hanging the lights this weekend take advantage of LED lights. In addition use plastic light clips as accessories…..they are much safer than wire or Clark’s method of staple guns. When lighting trees work in a spiral wrapping lights around each individual branch….it will look better and you won’t be dealing with a tangled spider web in freezing weather in January when you decide to take them down. Spiral the lights from the base to the top on evergreens. Remember with many landscape shrubs tender buds have been formed in the previous growing season that now dormantly await next spring. Avoid damage to them when pulling, dragging, wrapping or attaching strings of lights.

for decorating the deck at Christmas time.  He would stretch out the light set and stuff one light and a little bit of the cord in each small bottle holding them in with a little electrical tape. After doing this with numerous bottles he hung them up and plugged it in for a party atmosphere on the deck…….you could say he decked the halls with bottles of vodka….fall la la la la la la la la….