In July and August home gardeners can be subject to a sudden attack on tomato and pepper plants by a large insect that almost looks like an alien life form. The bright green and large Tomato Hornworm can frighten and creep you out when they make their appearance. I had an all out attack on my tomatoes and peppers while I was gone on a trip to the west coast. When I returned they had ravaged the foliage as well as green tomatoes and peppers in my garden.

They can be difficult to spot because of their color until you see the damage which can be swift and complete. Foliage is standard fare with stems stripped of leaves but they will also attack green tomatoes or peppers like the one I plucked off and placed on a fence rail pictured above. The adult phase is a Sphinx Moth with a wingspan of up to 3 to 4 inches! The adult lays the eggs on the plants in your vegetable garden and the hatching larvae grow quickly through a series of stages until you see the large 3 to 4 inch hornworms as pictured above. When they’re done ravaging your garden they fall to the soil burrowing in to pupate and start the cycle over at a later date. They will overwinter in soil to create problems the following season.

Identification and handpicking is the best control….if you’re too squeemish ask a kid to do it for you……give them a quarter for each one they can find. In severe outbreaks an insect control like Sevin could also be applied. Fortunately there are natural predators like the Braconid Wasp which will cover a hornworm with white cocoons as in the picture I took below……this hornworm is living on borrowed time and won’t be long for this world. 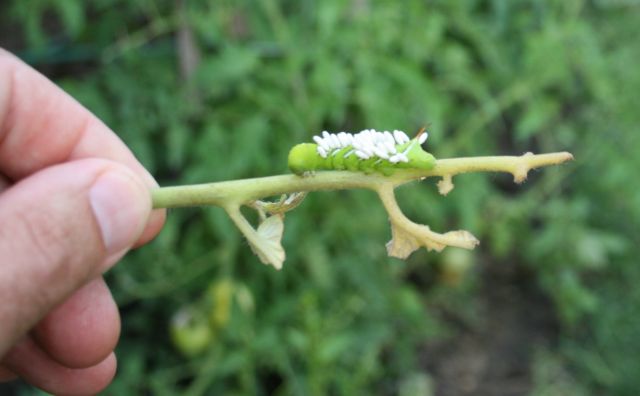