No need to call Peter Venkman and the Ghostbusters. That strange looking blob on your bark mulch is just a fungi…..actually single celled bodies of Plasmodia or mass of Plasmodium that moves and “eats” like an amoeba. 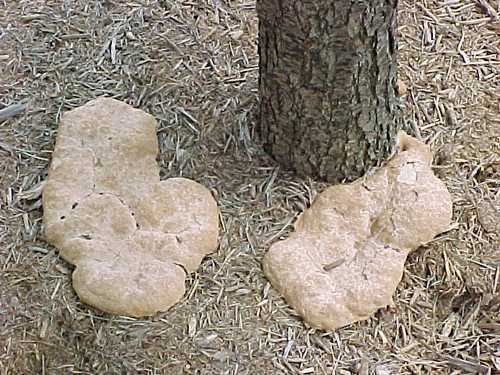 A shape shifting group of organisms that can strike fear in the heart of an unsuspecting homeowner. Who ya gonna call? Well they usually call me in a panic and go on to describe the mass as either “dog vomit” or “scrambled eggs”. The most creative description I’ve heard lately is from a friend of mine who described it as “Hollandaise sauce”. Slime molds appear suddenly usually on bark mulch around trees and landscape material in the heat of summer when enough moisture is present. Don’t worry, the panic is “mulch to do about nothing”. Get enough rainfall or irrigation combined with heat and humidity and these amazing masses closely related to amoebas or seaweed will appear out of nowhere. Technically they don’t appear out of nowhere….they like any fungi were waiting for optimum conditions. Because the plasmodium feed on bacteria and decay it’s not unusual for them to take up residence on your mulched bed. With varying temperature, pH and what the plasmodium eat it is not unusual to see different colors including bright yellow causing the mold to look like French’s mustard. The slime mold will eventually dry and turn brown and “dusty” which is the spore stage to ensure future excitement when conditions are right. Scoop up the slime mold and dispose of it or break it up and allow it to dry out. In mulch areas it may be a good indication that the mulch is “hydrophobic” and should be “stirred” anyhow. This will allow moisture to penetrate the mulch as opposed to sitting or running off. Also make sure for plant health that mulch is not applied too thick…..1 to 2 inches is plenty.