Skip to content
Thank You Very Mulch > Garden Blog > Spring > Achoo! Something to sneeze at…..

Tough spring so far for folks who struggle with pollen and allergies. From the horticultural side of things I marvel at a plant’s ability to reproduce and expel the pollen that causes so many to suffer from allergies. Wind can play a major role in carrying pollen. On windy days you can actually watch the pollen grains being carried from trees like evergreens. Conifers (cone bearing plants) 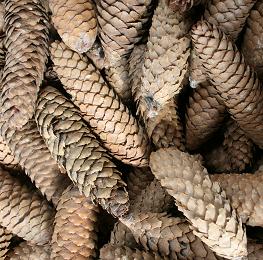 like Pine, Spruce, Fir, or Larch as well as deciduous trees like Oak, Sweet Gum or Birch are what we call monoecious plants. Monoecious plants have separate male and female flowers or cones on the same plant. A dioecious plant has male (staminate) flowers on one plant and female (pistillate) flowers on another plant. They have to cross-pollinate from one plant to the other, a good example being Ilex (Holly), Mulberry or Bittersweet vine. You’ll have to see your doctor about your allergy problems, but at least I can give you these pictures to distract you from your misery for a few moments. I mentioned the conifers above and a good example would be the ubiquitous Blue Spruce.

A Blue spruce is a monoecious plant with both the male and female cones on one plant. The staminate male cones are usually small and go unnoticed…but they pack the pollen let me tell you! The female cones are generally larger and found many times at the top of the tree. In spring the little male cones disperse their pollen and the wind drift will blow or float to the female cones (seed bearing ovate) at the top of the tree. That would explain why the air is full of pollen grains which can travel miles and miles from the tree.

Keep the tissues and allergy pills handy as you consider this final thought. Plants which depend on wind for fertilization have pollen adapted to travel by air. Plants that depend on bees or other insects will often have sticky and larger pollen grains. If the pollen grains must be transported by wind like Oak trees or cone bearing plants like Spruce or Pines, the grains are as light as possible and some like Pine pollen have wings or air sacs to buoy them allowing them to travel great distances!