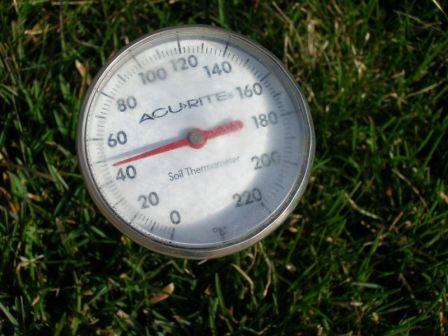 As you can see from the reading above on March 31 we’re closing in on 50 degree soil temps! The warm air temperatures are waking up the landscape. Things will really start moving including germination of crabgrass and the need for application of a pre-emergent barrier when soil temperatures get to the 55 to 60 degree range. Now take a look below at the soil temperature reading along the curb edge of a busy roadside strip of grass……56 degrees the very next day, April 1. This points out the fact that it’s important to apply crabgrass controls with care and precision along road, driveway and sidewalk edges. A little “lawn and order!” These are the “hot spots” of the lawn and most prone to crabgrass infestations. I use a drop spreader for applications in along the edges and a broadcast spreader for the rest of the lawn.

Check out the Hellebores covered in buds and breaking blooms. Also known as Lenten Rose these wonderful perennials are reliable early bloomers! 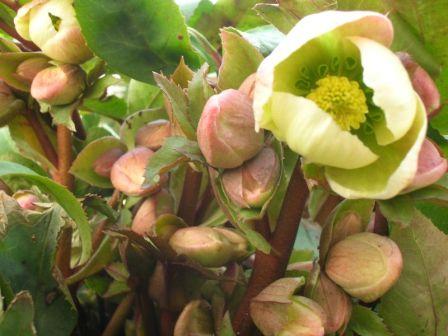 The tulips are growing at a brisk pace. Some of the tulips with their speckled foliage are trying to show up the flowers soon to come……. 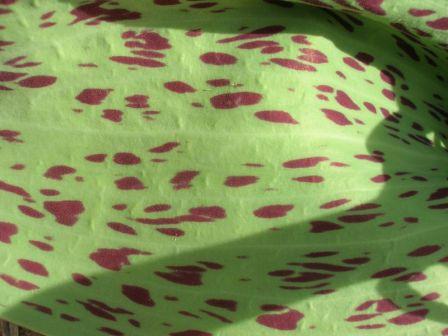 Pansies are amazingly hardy. These Pansies planted last fall are recovering from their winter nap under a foot of snow. Hard to believe just a few weeks ago these guys were hidden by a pile of snow…… 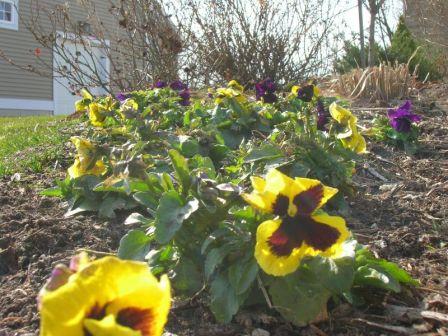 Fall planted Pansies will reward you in September and October and then again in March and April…..

And this is why we don’t prune Lilacs in the fall. Look at the thick buds on the plant below ready to bloom in about a month. Lilacs produce their blooms on the previous years growth so if pruning is needed, do it right after they are done blooming. 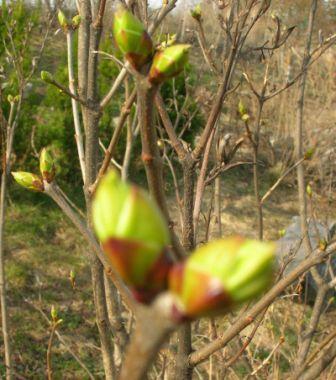 In other gardening news, it’s no secret gardeners love to talk about the weather. This past week record breaking temperatures for late March and early April in Michigan. Meanwhile our friends on the East Coast have had record setting rainfall. It brings up the point that in flooded areas, plant roots suffer if submerged in water for more than a week or two. Roots submerged in water can’t access the oxygen they need to survive.

If standing water persists for two weeks there can be some root die back resulting in loss of vigor for the plant. Oxygen is necessary in the soil. When roots are not able to obtain oxygen they eventually die from root suffocation. There is no cure or remediation for root suffocation. We often see plant decline in landscape plants growing in compacted clay soils…the plants become weak and visibly show their decline due to insufficient air spaces in the soil surrounding the roots. Same concept as flooded areas, just slower death and decline.

In 2009 a disease known as late blight affected many tomato plants throughout the northern states. The disease is thought to have started in tomato transplants. The disease is known as Phytophthora infestans US-22 and causes late blight on tomatoes and potatoes. The pathogen can only survive in live tissue and does not overwinter on tomato debris unless kept warm in a compost pile.

In years of serious late blight outbreaks it is often followed by sporadic outbreaks in following years. As we found last year, once the disease takes hold of a plant, there is little that can be done to halt it’s progress. Large patches of plants can die within a week to 10 days. Hopefully a warmer less wet summer this year will help. Good cultural practices like spacing, staking, base watering and a sunny spot are good ideas regardless of the season. Use of copper fungicides or fungicides like Mancozeb may be applied to keep you and your tomatoes from getting “stewed” again this year! Daily updates on the risk of late blight this season will be available at: http://potatodiseases.org/

Finally let’s all just celebrate the fact that spring is breaking out all over. It has been a long winter and we’re all ready for a “kick in the plants!” Or should I say ready for a spring “stimulus?” A few months ago when President Obama urged Congress to pass a stimulus package he would talk about projects and jobs that are “shovel ready”……..

We’ll I’m here to remind everyone that to lift our spirits there is no better “shovel ready” stimulus than a weekend in the yard and garden. Enjoy the arrival of spring everyone!