Sneezing and sniffling we reach for a tissue and long for spring during the final days of winter. Snow in February and March will test your patience….you’ve paid your dues and you’re ready to get growing. It’s at that time you need some “cold meditation” 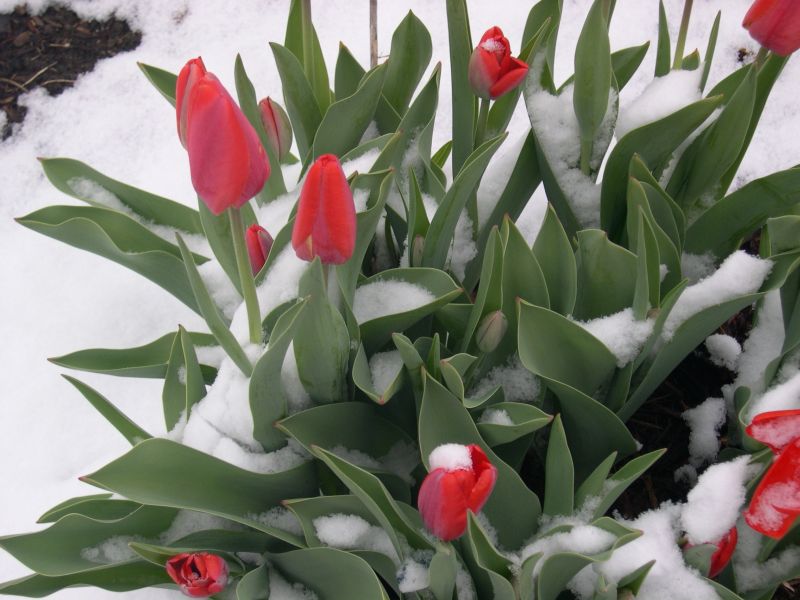 Through the ages gardeners have been weather watchers, protecting their “hortfolio” from killing frosts, droughts and other devastations. I’ll never forget a few years ago seeding a large lawn area.

A few days after seeding, a 3 day low pressure system circulated counter-clockwise like a hurricane in West Michigan dumping rain in  torrents. After 3 days of downpours and wind most of the seed was gone, washed away……weather had proven to be the “long arm of the lawn” and showed me who was boss…..my efforts were “lawn gone”. The year previous a mid-April snow storm (red tulips above) gave us a “root” awakening that the calendar does not decide when winter is over. These experiences cause us as gardeners to be on the look out for the next best thing to give us an edge dealing with our temperamental associate…..weather. A few years ago I interviewed author David Francko about his book “Palms won’t grow here and other myths” who calls cold tolerance products the holy grails of horticulture. Since that time Franko has developed a spray-on formula increasing a plant’s tolerance of cold temperatures by several degrees.

The spray claims to improve a plant’s cold tolerance between 2.2 and 9.4 degrees Fahrenheit. This spring as we plant annuals or bring out some less than hardy victims….I mean plants……use of the spray moves your temperature zone about 200 miles. That’s a big deal when the difference between a killing frost of 30 degrees could be avoided if you were only 200 miles south. Here in Grand Rapids Michigan it would afford my tender babies the “balmy” temperatures of Indianapolis, Columbus or Springfield when the difference between success and failure could be a mere degree or two on a spring night.

The spray sold as “FreezePruf” adds extra capacity to what a plant can normally do attempting to stand up to freezing temperatures. The spray is non-toxic with the ingredients already used for other reasons in various foods or in food production. This winter’s cold in the south created what I call “Gardenmageddon” as zone 8 and 9 plants took a beating with winter weather we’re more accustomed to in the north. The potential exists that a spray such as FreezePruf could protect home plantings of Palms, Bananas, Hibiscus and other southern landscape plants from significant die back in unusual temperature weather events. That same protection could be used for Geraniums or Petunias during a night-time frost in Michigan during the month of May.

Speaking of “turning blue”……we all love our Macrophylla Hydrangeas and often look for products that will “turn them blue” in the landscape.

After you’ve mastered the art of positioning Hydrangeas properly in the landscape so they overwinter and produce blooms, the next goal is often to produce a true blue mop head bloom on the plants. To the rescue is “Hydra Blue” available only at a Master Nursery like Flowerland in Grand Rapids Michigan. Blue is a desired color for many gardeners in the landscape. The color blue can visually cool a landscape to the eye on a hot summer day and combined with an opposite color like yellow can make quite a colorful and appealing impact. Hydra Blue uses aluminum sulfate to lower a soils ph encouraging a deep blue flower color.

There you have it…..some “cold meditations” for your late winter dreaming……can’t wait for spring!