Check out this picture from one of our Flowerland customers.  Evidence of a   “Da-Vine Inter-“vent”-ion in her home. 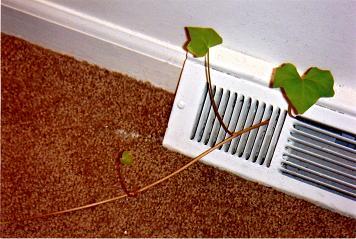 It brings up the debate about English Ivy or Hedera helix, is it a friend or foe? You will find some web sites that vehemently oppose Ivy as an invasive plant that chokes out native species and weakens trees while providing habitat for pests like mice. It has no natural enemies, even slugs hate it. Others promote Ivy as a useful versatile ground-cover that flourishes in North American climates. This “dimorphic” plant (has two forms, juvenile and adult) which in its juvenile form can play well as a ground-cover and in its adult fruiting form invasive and aggressive. I’ve heard rumors of outfielders getting lost in the Ivy at Wrigley Field in Chicago. So where do you stand on the issue? In the picture above the vine grew through the exterior wall, the duct and made an appearance inside. Maybe it wanted to watch some TV, it is football season you know and I would suspect this plant is an Ivy League fan.