Here are some pictures from today’s Moon Tree dedication ceremony in Wyoming Michigan. 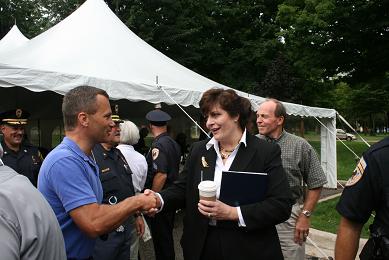 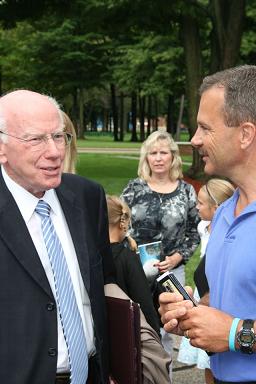 Pictured below and to the left I’m chatting with Congressman Vern Ehlers who also gave a great speech at the dedication. Congressman Ehlers has always supported science and space exploration commenting in his speech that at one time he and his wife had Alan Shepard to their house for dinner! 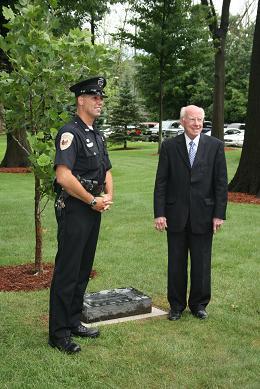 Here is Officer Adam Bartone with Congressman Ehlers having their picture taken by the Moon Tree. Officer Bartone was the  inspiration and led the charge to bring the Moon Tree to Wyoming. Great job Adam, you are a true leader in our community! 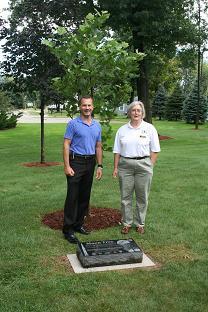 Here I’m pictured at the Moon Tree with Jane Cliff from the U.S. Forest Service. It was her father that worked with Astronaut Stuart Roosa, a former smoke jumper with the Forest Service, to take tree seeds to the Moon and back. Jane also mentioned in her speech that she went to school in Washington DC with former President Gerald Ford’s kids. Great job at the dedication Jane!

On January 31, 1971 Apollo 14 lifted off from Kennedy Space Center to land men on the Moon for the third time. The moon landing was near Fra Mauro, the intended landing site of Apollo 13 before its historic voyage and rescue.

Some of the cargo on Apollo 14 has now made a historic landing in Wyoming Michigan in the form of a Moon Tree thanks to the efforts of a Wyoming Police Officer. It’s a story of restoration, community and history. 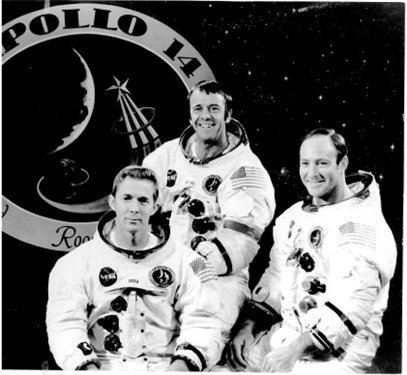 Apollo 14 carried three Americans: Captain Alan Shepard USN, Major Stuart Roosa USAF and Edgar Mitchell USN. Stuart “Smoky” Roosa started his flying career as a smoke jumper with the U.S. Forest Service.  Roosa felt a special fondness for the agency tasked with protecting and preserving the nation’s forests. It’s no surprise understanding his background that his mission would be a mix of forestry and aeronautics.

Roosa’s skill as a pilot was put to the test when initial attempts to dock the lunar module with the Command Module “Kitty Hawk” failed. The problems were overcome by his skill and careful coordination with the crew and ground controllers.

Stuart Roosa’s love for trees was demonstrated by the fact he carried with him seeds from an American Sycamore in honor of the Forest Service. The seeds were planted upon his return becoming known as a “Moon Tree”. Stuart Allen Roosa passed away in 1994 at the age of 61, but his dedication, bravery and passion live on today with the Moon Tree. 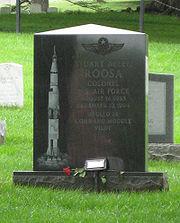 Pictured here is the grave site memorial to Stuart Roosa at Arlington National Cemetery. One of Roosa’s  Moon Trees was planted and dedicated in the city of Wyoming Michigan in April of 1976. The tree was dedicated with these words from then President Gerald Ford:

“I dedicate this tree which was taken from earth to the moon on January 31, 1971 aboard Apollo 14. This tree, which was carried by Astronaut Stuart Roosa, Alan Shepard and Edgar Mitchell on their mission to the moon, is a living symbol of our spectacular human and scientific achievements. It is a fitting tribute to our national space program which has brought out the best of American patriotism, dedication and determination to succeed. Planted in this community may this young tree renew our deep rooted faith in the ideals of our founding fathers and may it inspire us to strive for the kind of growth that benefits our own citizens and all mankind.” 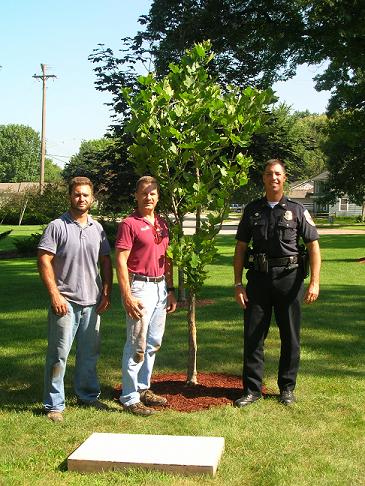 A few years ago the  Moon Tree dedicated in 1976 in Wyoming died. Due to the efforts and dedication of Officer Adam Bartone pictured at the far right, a Moon Tree descendant from Stuart Roosa’s original Moon Tree was secured this past year for a planting and rededication. The picture to the right was taken this past week when after months of nurturing and care, the tree was finally planted in preparation for a dedication event that will be held on the grounds of the Wyoming Police Department at 10 AM August 26, 2009. My son Rick Jr. pictured to the left and myself (center) had the honor and privilege to work with Officer Bartone, plant the tree and be involved in this great community event. Officer Bartone’s dedication to the community and its history is greatly appreciated and inspirational. 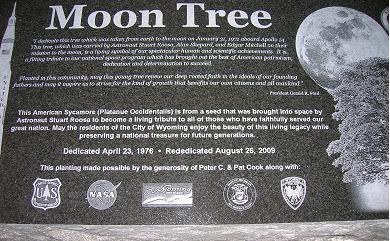 Representatives from NASA and the Forestry service will be in attendance for the ceremony. A beautiful stone memorial will be placed at the base of the tree as pictured here. It is my hope that the spirit of the Apollo 14 crew and the Moon tree will live on for years to inspire young people to “strive for the kind of growth that benefits our citizens and mankind.” A very special thanks to Officer Adam Bartone, one of Wyoming’s finest, for his efforts and dedication to both his community and our history that lives on in the branches of the Moon Tree that today reaches for the sky. 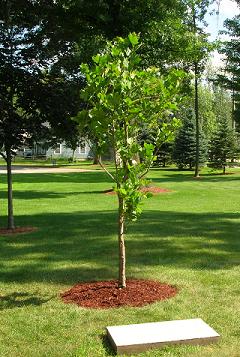