Good news on the continued efforts to revive the magnificent American Chestnut tree. At the turn of the last century these magnificent hardwoods were virtually wiped out off the landscape of the eastern U.S. by a fungus. 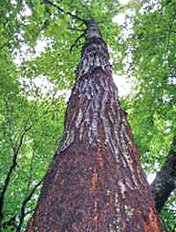 Using a grove of survivors in Wisconsin and crossing the American Chestnut with blight resistant Chinese Chestnuts has proved promising for a possible return in the next decade.  Chestnuts grow faster and larger than most other hardwood species allowing them to sequester more carbon than other trees over the same period. Read about it at this link: http://www.sciencedaily.com/releases/2009/06/090610154457.htm

You can also learn more from ACF……the American Chestnut Foundation at this link: http://www.acf.org/