A lot of people are noticing the ugly nests and damage caused by Eastern Tent Caterpillars causing them to become uptight or shall we say “tents”…..don’t lose your “composture” its time to get “bug-wiser”. 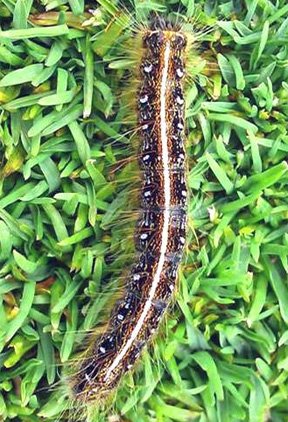 This picture of an Eastern Tent Caterpillar from Dr. Dave Smitley MSU Department of Entomology who reports thousands of these caterpillars that defoliated trees are wandering across turf areas, fairways, greens and tees on golf courses! You probably notice them as you travel 70 MPH down the road with the disgusting nests and defoliation they cause in roadside trees. They will form nests and attack the foliage of Wild Cherry trees, Apple trees, Crabapples, Plums, Peaches, Cherry trees as well as Ash, Birch, Willow, Maple, Oak and Poplar trees.

It’s close cousin the Forest Tent Caterpillar is not a “camper” (doesn’t make tents) but will make a mess and do significant damage to foliage before they pupate. 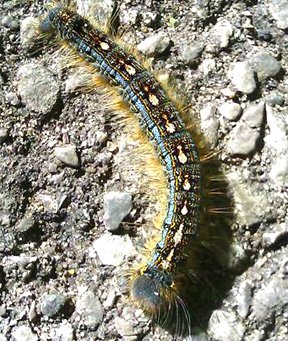 Fortunately sometime in June, both the Eastern and Forest Tent Caterpillars will complete their defoliation practices and pupate. Unfortunately the adults emerge, fly around and mate. They will attach egg masses to branches that can contain as many as 150 to 350 eggs! They will overwinter on branches in this egg stage until next year when they again emerge and trash the place. You can use a high pressure nozzle on a hose to blast them out of the tree. It’s entertaining and will keep you occupied for awhile, but not necessarily effective or efficient. This method works best with the fall webworm that we’ll see in September and October. Again remember, Eastern Tent Caterpillars make nests, Forest Tent Caterpillars do not. They both however will overwinter in egg masses on branches that you can scrape off and destroy prior to next spring. You can also apply a BT spray or Sevin for some measure of control now while in the caterpillar stage before they pupate. For larger trees it may be more practical to use an Imidacloprid drench on an annual basis to reduce populations on favorite trees over a period of years. Again don’t get too “tents” because nature takes its course. Outbreak populations usually collapse after a few seasons due to the buildup of populations of natural enemies drawn to the party!