Everybody loves Rhododendrons and Azaleas, but I’ve found when it comes to success it is often a matter of “putting your best root forward.” The root system is small compared to the top of the plant so your margin for error is smaller. Get the soil right with plenty of organic material and peat moss tilled in with the existing soil. 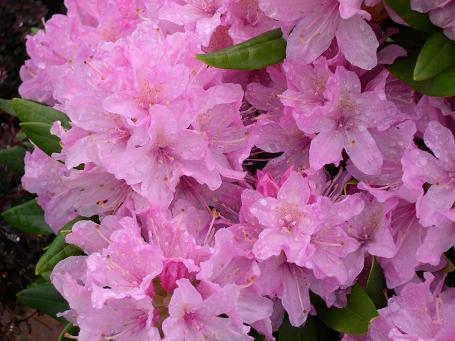 A big issue with Rhododendrons and Azaleas is something called Phytopthora root rot. Phytopthora is as I understand it from the Greek meaning “plant destroyer”.  It is an often overlooked disease that attacks the roots and root collar. Broadleaf evergreens like Rhododendron, Azalea, Boxwood or Holly are intolerant of poor soil drainage. They need a moist but well drained soil or you may lose the plants to Phytophora which destroys the plant’s water and nutrient absorbing ability. The problem also can develop in plants planted too deep or plants that are mulched too heavily.

Another Rhododendron problem is root weevils that in May and June “notch” bites out of the foliage. They crawl from the soil at the base of the plant and do damage while you’re in bed at night. You can spray with Orthene or for an organic approach, clip off lower branches to disrupt their “staircase”. Some people will use Tanglefoot at the base, a sticky substance used as an insect trapping method. 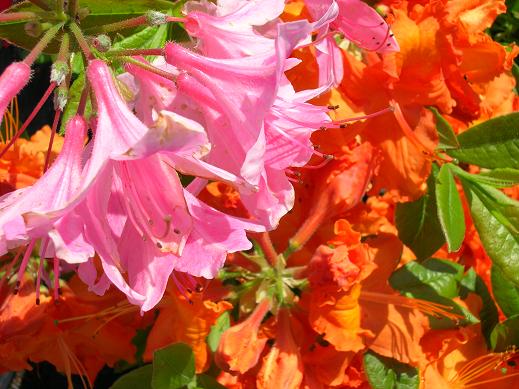 Here is a picture of some pink and orange Deciduous Azaleas. These plants are tough, especially the “Northern Lights” series. If you struggle with Rhododendrons or Azaleas you may want to try these. Because they drop their leaves in winter they tend to be more winter hardy in Michigan. For Broadleaf evergreen Rhododendrons or Azaleas the North side of the house (structural winter shade) or the East side of the house (piling snow and structural block from prevailing west winds) is best. Deciduous Azaleas I have had success growing however on any side of the house because they drop their leaves in winter.  Don’t forget to feed your Rhodies and Azaleas in spring with HollyTone and into early summer and then stop feeding. You want them to harden off before the next winter.

With all this said, remember, the key is to get the soil right and put the plant in the right place so you put your best “root” forward!