During all the campaigning leading up to the Obama administration, there was a lot of talk about “day one” of a new administration. The Better World Campaign held an “On Day One” contest collecting ideas and votes on how a new President elect could renew and inspire community. 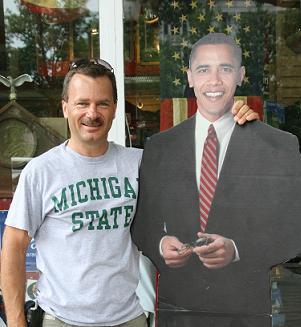 They finally decided that global leadership begins at home……on the White House lawn. That’s right, as in my previous post suggesting a hybrid vegetable be grow in the White House garden named “Barrack-oli” it appears the Better World campaign agrees that gardening is a winner. Their winning idea comes from a man from Scarborough Maine who proposed a small “Victory Garden” on the White House grounds. The idea recognizes the economic, energy and environmental benefits of local, organic food production. The hopes of Mr. Doiron, the contest winner, is that the White House is America’s house and their example of planting an organic and sustainable garden at the White House will inspire collective action. I hope the President’s team decides to act on Mr Doiron’s idea. It just goes to prove that no matter where you live or what your political positions, gardening is always a good idea and always a winner. Like Thomas Jefferson said, “The greatest service that can be rendered any country is to add a useful plant to it’s culture”.  For more information regarding the On Day One contest, here is the link to their website: www.ondayone.org