We all plan to rake Maple leaves in October, many looking forward to that season or time of the year. We don’t however plan to clean up “Maple Messes” in May or June? That’s right, “Maple Messes” with both falling leaves and twirling “helicopters” falling to earth with some years worse than others. 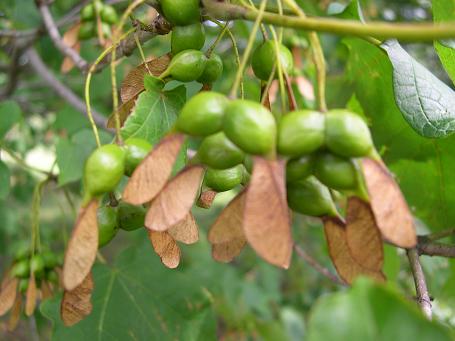 Let’s start with the “helicopters” which are actually Samara, a type of fruit with a flattened wing of papery tissue. It’s the shape of a Samara that allows it to wing away in the wind from the parent tree to seed and grow where it lands. Isn’t nature a totally cool kick in the plants! In the case of Maple trees the balance of the seed on one side and the wing on the other makes them spiral as they fall creating the helicopter effect. The high number of falling Samaras raining down on your deck this year has it’s roots in environmental conditions of last year. The drought and heat of last summer caused a lot of trees to produce above average flower bud numbers. This spring’s weather was favorable for flower pollination and the end result are thousands of helicopters landing on your just washed car parked in your driveway. Soon thousands of little maple tree seedlings will be growing everywhere. Don’t worry about them in the lawn, weed killer won’t be necessary. This time of year you cut the lawn frequently and as you cut it, you cut the tops off these seedings which will soon die for lack of foliage. If a lot of seeds germinate and find root in your lawn, it may be an indication you are cutting the grass too short and have thin areas that need work. It may also indicate you allowed things to get a little too dry last year without some supplemental watering to the turf and trees. 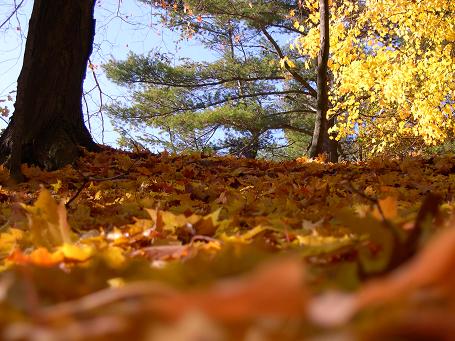 When maple trees drop leaves in spring it doesn’t look like the picture to the right. Instead the leaves fall but they’re still green. The problem is caused by maple petiole borer larvae that feed in the petioles (leaf stems) weakening the stem and causing the leaf to fall. Don’t lose your “composture!” Now that you are “bug-wiser” (couldn’t leaf that one alone) and understand the cause, you’ll understand it’s temporary and the tree loses no more than 25% of it’s leaves, the tree will be OK. Some leaf drop may be accelerated or enhanced by wind and storms. Look at it this way, its spring training for raking and when fall does come, you’ll be ready.