Check out the picture sent to me from Craig in Wyoming. 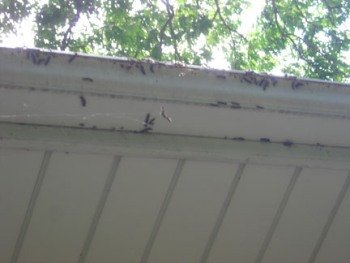 His rain gutters are overflowing with Gypsy Moth catepillars. They are actively feeding on Oak trees in June and raining down……well let’s call it black rain. It’s too late to do anything in the form of a spray this year, soon these invaders will pupate and become the adult moths. Tanglefoot banding on the trees will help as they move up and down the tree. Make sure to use a tree wrap before applying the sticky substance so you don’t have a permanent ring on the trees. Get the neighbors together for a BT spray next spring. BT must be ingested to work and its toxicity is limited and short lived, that’s why timing is so important. In the mid to late 90’s communities would band together for well timed aerial BT sprays in May just after the larvae had emerged. This seemed to work at the time but the big problem is there is a difference between the mid to late 90’s and now……the economy. Aerial spraying is expensive and most cities or communities don’t have the budgets today they had 10 years ago. Some neighborhoods have resorted to pre-defoliation thinning of the trees to help control the problem. In this case, the area affected in Wyoming has a monoculture of Oak trees, a favorite of Gypsy moth larvae. It points out again, just as in the case of Emerald Ash Borer, diversity in the landscape (planting a variety of species) is very important. Later this year into the winter seek out the tan colored egg masses and scrape them off and destroy! This year’s outbreak is the worst we’ve seen since the late 90’s when neighborhoods banded together to fight gypsy moth invasions.