No they’re not “aliens” they’re Alliums or ornamental onions! The one pictured to the right has a common name Star of Persia, it’s Allium Cristophii. 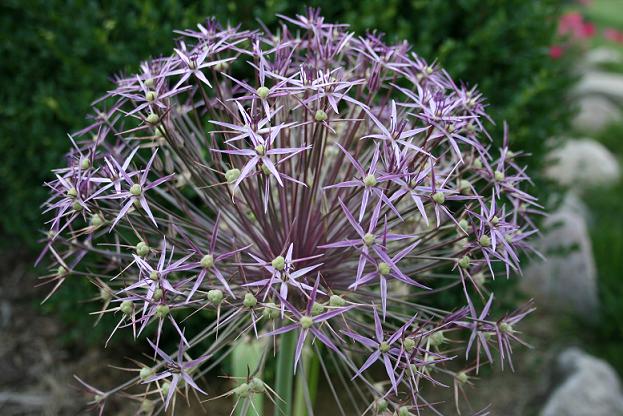 I like to call it Sputnik flower because it makes me think of the Soviet Union satellite launched on October 4, 1957. You can enjoy Alliums by buying the bulbs and planting them in the fall. You can get everything from short “drumsticks” to the spectacular “mid-range” size like Christophii or Schubertii to the tall (4 feet!) Giganteum or Globemaster Alliums that sway in the breeze on a tall stem.  Here’s the best part about Alliums in the landscape……they are deer and rabbit resistant because they are in the onion family!

Here’s an another “alien” that appears out of no where in late June and early July……slime mold! This fungi will appear on top of the mulch and look like a dog just threw up in your landscape! Don’t panic and run for cover, try to improve air movement and drainage. It’s a good idea to stir up landscape mulch in summer because sometimes it becomes matted and hydrophobic. 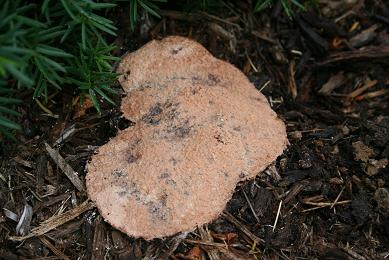 Slime mold is interesting, try gently stirring it up with a garden stake and come back later to see if it has reformed back to it’s original shape. I’ve seen it where in the evening hours it seems to glow like it’s toxic waste or worse yet the dog ate a bottle of mustard before throwing up.

And finally, how about an identified flowering object! This plant should not be alien to your landscape. Oakleaf hydrangea is relatively easy to grow. The summer time panicles of flowers as pictured below and to the right are spectacular. The foliage is interesting looking like giant oakleaves. The fall color is  “kick in the plants” good! 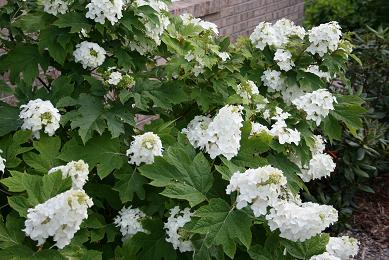 Avoid the slime mold and make sure that Alliums and Oakleaf hydrangea are not alien to your landscape!