OK, so we get to Memorial weekend where you’re finally convinced that you can safely plant your veggies. Nothing compares to a freshly picked tomato from your own garden making tomatoes arguably the most popular garden veggie around. There are hundreds of varieties available to you, but one of the key issues is do you buy a “determinate” or “indeterminate” tomato plant? 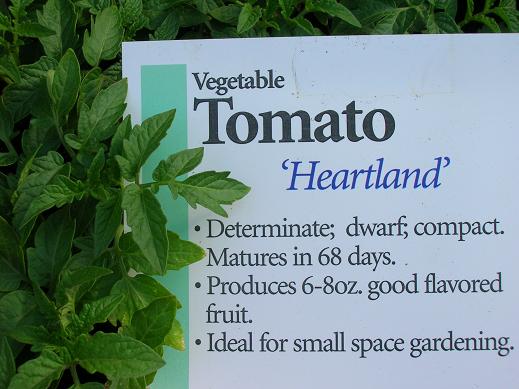 Whether you buy a “determinate” or “indeterminate” tomato plant has nothing to do with its determination to perform for you! It has to do with how the plant sets its terminal buds on the plant. In other words, an indeterminate tomato will grow indeterminately in lieu of frost or winter. If we didn’t have killing fall and winter temperatures, it would grow to be a “tree” and continue to produce fruit. Never setting a terminal flower cluster, indeterminates are more of a “vining” tomato continuously producing fruit throughout the season until killed off by frost. These tomatoes are great candidates for trellises, stakes or tomato towers. Some pruning of indeterminate tomatoes might help the remaining stems focus their attention on fruit production in lieu of growth. A determinate tomato generally form lower bushes and are good for container growing. A cluster of flowers set at a determinate end of the stem producing fruit at the same time and slowing the growth of the plant. It’s not a bad idea to grow a combination of determinate and indeterminate varieties for continuous fruit. If you can’t make up your mind, some varieties today have been developed as “semideterminate” giving you the best of both worlds! When it comes to tomatoes don’t get “stewed”, I recommend you plant indeterminate tomatoes in the garden, determinate tomatoes in containers on the patio and throw in a few semideterminate tomatoes into the mix. In doing so you’ll have more than enough to share with neighbors and friends in July and August who already know the best way to have a lot of fresh tomatoes is to admire and praise the tomatoes growing in a neighbor’s yard! If you over do it, you’ll find there is nothing tougher than giving away tomatoes and zucchini in August. Put them in a paper bag, set them at your neighbors door, ring the door bell and run!