Skip to content
Thank You Very Mulch > Garden Blog > Kick in the Plants! > What’s Tina Turner got to do with it? 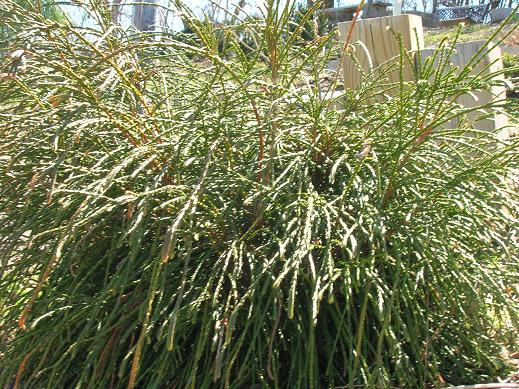 I’m a big fan of Tina Turner and love to watch her perform. You can always count on her for a high energy performance, and talk about durable……what a career! The plant pictured above is in my landscape, I call it my “Tina Turner” plant. The plant is durable year after year and puts on a great performance. Like Tina’s big hit “You better be good to me” this plant has been good to me. The reason I call it my Tina Turner plant however is that it looks like her famous hair on stage. The rope-like foliage of this plant when it sways in the breeze or gyrates in a pot looks just like Tina’s hair as she struts back and forth on stage singing “What’s love got to do with it?”

The plant is Thuja Plicata ‘Whipcord’. Thuja Plicata are the tall and stately “Great Western Red Cedar” that grow prolific in the Northwest, areas like Washington, Oregon and British Columbia. On the trips I’ve taken to the west coast of British Columbia, I stand in awe at the base staring up through the branches of these gentle giants. ‘Whipcord’ is a sport or discovered “mutant” seedling of these giant Thujas. I fell in love with the plant at a favorite nursery of mine in Oregon called Iseli nursery. Iseli nursery is a wholesale grower for the nursery industry specializing in ornamental conifers for the landscape. It’s exciting when a “chance” seedling is discovered and then developed. Generally plants like this are not readily available because demand certainly is far greater than production. Very different from the plant’s “cousin” Thuja Occidentalis or known as the ubiquitous Arborvitae like Pyramid Arborvitae or Globe Arborvitae, widely cultivated, planted, and commonly overgrown in the landscape. Aside from sharing the genus “Thuja”, that’s where the similarity ends more or less. For example the Thuja occidentalis common Arborvitae is like candy to deer browsing here in the north. Thuja plicata tends to be considered deer resistant. I have had plants damaged in my landscape surrounding my ‘Whipcord’ which was left untouched.

Just like tickets to a Tina Turner concert aren’t cheap, neither is Thuja plicata ‘Whipcord’. Plan on a little bit of sticker shock. That said, both the tickets and the ‘Whipcord’ are worth it for a “private dancer.”